- November 25, 2014
Stacy Gregg is really striking out – after her modern day biographical story The Princess and the Foal, she’s now moved on to a story where the focus moves between the present day and 15th century Spain.

If you’re a regular of my reviews, I expect you can guess who the heroine is: yes, the child of a broken family. Beatriz lives with her mother, although their current home is the Phaedra, a boat moored off the Abaco Islands in the Bahamas. Beatriz' mother is researching jellyfish. Beatriz wants to go back to the USA to live with her father in Florida, but her mother’s not keen. 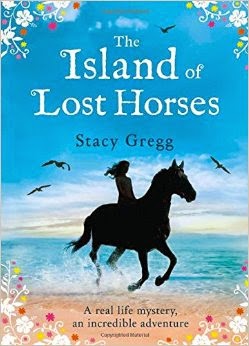 When the novel opens, Beatriz is being delivered back to her mother on a tractor by a woman called Annie, after Beatriz suffered sunstroke. It turns out that Beatriz, in her wanderings around the island, came across a mare struggling in a mudhole, and after an epic struggle, Annie and her tractor helped them both out. Annie is the conduit between Beatriz and the world of 15th century Spain. She sees the connection between the mare Beatriz names Duchess and Beatriz, and so gives her a diary to read. The diary is obviously hundreds of years old, and as the story progresses we learn that it was written by a girl who has somehow ended up on the Abaco Islands, but who at the beginning of the diary is with her horse at the court of Queen Isabella, when Columbus is trying to get the Queen to fund his next adventure, and Torquemada is stalking Spain, ridding it of heresy.

The two stories intertwine, as Beatriz struggles to save the mare Duchess and her herd from the hurricane that is heading towards the Abaco Islands. As she fights for Duchess, Beatriz finds her place in the world and what’s important to her, and learns that relationships are more complicated than she believed. Her counterpart, Felipa Molina, learns much the same sort of thing, though in the rather more brutal surroundings of Queen Isabella’s court, where life can be threatened by the plague, and the life of a half Jewish girl is one that could at any second be threatened by Torquemada.

Stacy Gregg tells a very good story. I enjoyed the way the two storylines mesh and diverge, connecting over the horse. She does a good job of portraying 15th century Spain, though with the odd anachronism like "ok", which sits slightly  oddly in the more formal language used in these parts. It’s a novel stuffed with women, this one: in the Beatriz section, the only man is her father, and he doesn’t actually appear. Annie is an eccentric and joyous creation: there is nothing wrong, Stacy Gregg says, with being thoroughly eccentric and doing things your own way. The women in the story all learn, in the end, to work together with the people who will help them best.

I don’t think you can go wrong with getting this for any pony-loving child for whom you need to provide a Christmas present.

P G BELL said…
A lovely story - I read this with my nine year old daughter. I reallly like the reality of the present intermixed with the historicallly accurate past and a really powerful ending.
13 May 2015 at 12:45