Showing posts from June, 2018
Show All

Controversial: Riding Magazine and equestrian controversy in the 1940s II 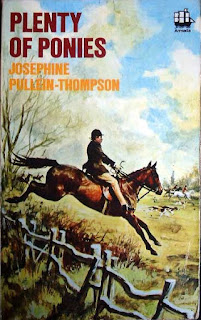 The Forward Seat, by Henry Baron (December 1940) The next topic in Riding Magazine’s series on controversial subjects of the day ( here's the first ) was one that would have generated pages of choleric spleen had it been written 30 years earlier. By 1940, using the forward seat while jumping, and while riding cross-country, was already pretty much accepted, but the very fact the subject made it into this series suggests that those who commissioned articles for Riding were aware of a small, but presumably persistent, group still using the backward seat. If we look forward a decade, there is evidence for this, as it appears this group was still alive and well in the 1950s. Josephine Pullein-Thompson, in Show Jumping Secret , which appeared in 1955, tells the story of polio-stricken Charles, whose cousins all ride. They attempt to teach him to ride – sitting well back, feet well forward so he can see them, and hands in his lap. It does not go well. Charles goes to have riding
Post a Comment
Read more

Controversy: Riding Magazine and equestrian controversy in the 1940s 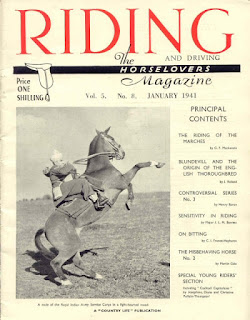 On my Facebook page a few weeks back, I posted a cover of Riding Magazine from 1941, really because it was the Pullein-Thompsons’ first appearance in print (Cocktail Capitulates – a piece written by all three on the schooling of a difficult pony). The whole point of a front cover is to encourage people to dive into the delights contained within, and as the magical pull of this edition had not faded over the 70 plus years since it was published, people wanted to know what was the controversy mentioned on the front cover? Riding, January 1941 The controversial horse was a series of articles appearing each month on a topical controversy. I’ve found three so far, and when I’ve found the rest of my 1941 copies, I shall be able to tell you if they continued beyond that. The series kicked off a couple of months before the issue above, with an article on how best to control the horse. (i) Using physical or mental methods to control the horse (November 1940) If you fought o
Post a Comment
Read more
More posts