Showing posts from August, 2010
Show All

- August 31, 2010
These photos are from the film being made by Stephen Speilberg. I had wondered if he'd stick with using the puppets and use a more graphic style, but it looks like it's real-life all the way.
3 comments
Read more

- August 26, 2010
You might have spotted I haven't posted this week.... I'm having a few days off (well, off-ish - am still at home and dealing with orders, but that's it!) Normal service will be resumed next week!
Post a Comment
Read more 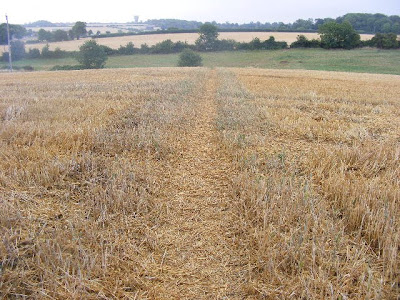 I love this time of year: even if it rains, the layer of straw covering the path means we don't get particularly muddy, and I love walking on the straw.

The straw is rather more treacherous this year than last as there are still large cracks in the path because of the drought. The straw has just floated over the top, which makes for some interesting moments.

Here are two of the last swallow brood. They must be nearly ready to fledge, as the little nest they're sitting on isn't the one they were hatched in, which is further up. The parents have very considerately nested over the hens' droppings board so I am clearing up after swallows as well as hens at the moment.

- August 18, 2010
There was a definite chill in the air this morning when dog and I headed out. Shouldn't affect these ponies though.
Post a Comment
Read more 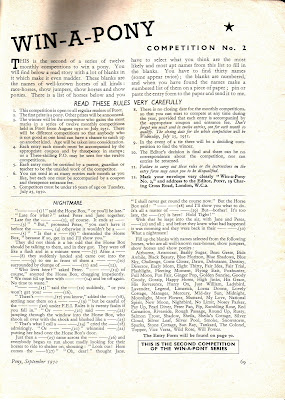 The ultimate dream for many a pony mad child was getting a pony, and some lucky souls achieved it by winning one. Judith M Berrisford's fictional Jackie did it in Jackie Won a Pony by winning a competition in Horseshoes Magazine.
People did it in real life too: Pony Magazine, in its earliest days, ran Win a Pony competitions, which required some dedication. It wasn't a question of whipping a quick essay off or doing a few questions: you had to enter twelve separate competitions over a year. Here's one from September 1950, in which you had to complete the story by filling in the blanks with names from the list of well known horses and ponies supplied.

This is the winner (or at least I assume it is: the competition presumably ran into 1951). Carolyn Brown won Mr Murphy, and this is a photograph of them, reunited, in 1958.
Dragon's Win a Pony competition in 1966 was rather less taxing: matching attributes to characters was all that was required. The competition was hel…
6 comments
Read more

The A Level mark machines

- August 16, 2010
"‘You’re just filling our minds with stuff that won’t get any marks!’” - is what Imogen Stubbs' children said to her and her husband, Trevor Nunn, when they attempted to give them other ways of looking at the texts she was studying for English. This is not just confined to the subjective Arts: my son is doing Chemistry, Biology and Physics.

"No," he said, when I said "ooh, you could look at this," when testing him. "I have to do what will get me marks and that won't." So, we turned away from investigating Dutch Elm disease back into the revision texts and the all-important margin with the mark scheme. I hope the A level exams have not turned my bright, maverick son, and all those other children with a thirst for just knowing stuff into mark machines. The tension they are put through at this time is anyway high: you cannot turn on the radio, television or open a paper without the words "A Level" and "miss out" le…
2 comments
Read more 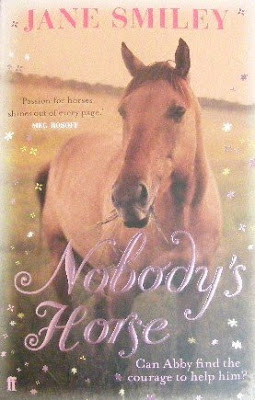 Jane Smiley: Nobody's Horse Faber & Faber, 2010, £6.99 (First published in America as The Georges and the Jewels)
Reading age 12+
Jane Smiley's website
Thanks to Faber for sending me a copy to review.

I've only tried to read one Jane Smiley before: Horse Heaven and that was a bit of a disaster. I struggled on to the middle, but gave up. So, when I heard she'd written a YA novel, I was curious to see what I'd make of it.
Nobody's Horse is the story of Abby, and her parents. Abby's father deals in horses: he buys them cheap in Oklahoma, feeds them up, tidies them, and has Abby ride them until he can truthfully say "a little girl can ride them", and then the horses are sold. So that Abby does not become too attached to the horses, the geldings are all called George, and the mares Jewel. Abby is generally happy with her lot, but not with having to ride Grumpy George, who bucks like a demon, and scares her. Abby's Uncle Luke tries some hor…
1 comment
Read more 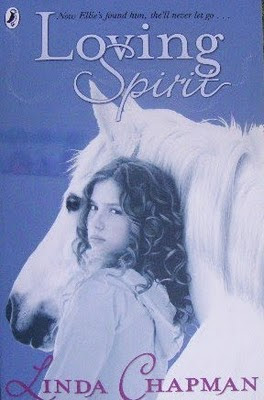 Amy! If you could send me your address, a copy will be sent out to you. Please send to enquiries at janebadgerbooks dot co dot uk.
If you missed the review of Linda Chapman's Loving Spirit, it's here.
Post a Comment
Read more

Does the book have a future?

What do you think? Does a future exist where the Reader's Digest Condensed Edition will become a sought after rarity, salivated over on Antiques Roadshow?
3 comments
Read more 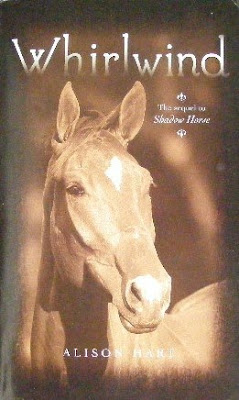 Thank you to Alison Hart for sending me a copy of this book.
Readers of this blog will know that I am very keen on Shadow Horse, to which Whirlwind is the sequel. That book I found enthralling: it's the story of how 13 year old Jas comes to be in a courtroom, accused (and later convicted) of attacking her grandfather's employer. Hugh Robicheaux breeds horses, which Jas helps him to show. Hugh is, however, interested in making far more money than he can do legitimately through selling his horses, so hatches an insurance scam. He buys ringers for his horses; arranges for the ringer to be killed, and then claims on the insurance. This he does with Jas's favourite horse, Whirlwind.

Black Beauty: a reinterpretation for the modern age

The Pullein-Thompsons: it's all their fault

- August 08, 2010
Liz Jones wrote The Exmoor Files, in which she takes on an ex racehorse, and blames the Pullein-Thompsons for it. They invited her to tea, and you can read about it here.
10 comments
Read more

- August 07, 2010
Many congratulations to the winners, and very well done to everyone who entered. It was a very tough fight up at the top, with just a single point separating 1st from 4th.
A word on how the answers were marked: I marked any name which was incorrectly spelled as wrong. It simply wasn't fair to the vast amount of entrants who did spell names properly to give marks for answers where I had to guess whether an answer was wrong, or right and badly spelled.
Champion Cup and red rosette to - Caroline Shaw (75 1/2 points) Smaller but still impressive cup and blue rosette to - Susan Bourgeau (75 points) Splendid green and yellow rosette - Kate Hills (74 1/2 points) Rather frilly yellow rosette - Bettina Vine (74 points)
Highly commended rosettes for doing jolly well and getting more than 70: Hannah Fleetwood, Valerie Amis, Sue Howes, Norman and Samantha Ritossa
If you had a go at the quiz, and want to be put out of your misery, the answers arehere.
Post a Comment
Read more 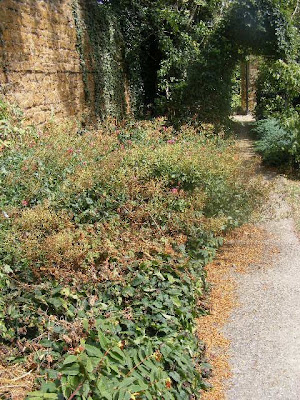 I took the picture below to try and show the brown desert the garden has become, but paradoxically it doesn't look too bad. It is, however. Even stuff that is usually impervious to everything, like geraniums, are turning up their toes. I plant for drought as our village is "first with the wind and last with the rain" and this is the first year I've had a problem. I try and water only from the water butts, water only the vegetables and keep new plants to a minimum but even the butts have failed, and for the first time in eleven years here I've had to use a hose.

The grey things of course love this weather.
The butterflies alas don't seem to. Not one single Peacock or Red Admiral have I seen, and only a single Tortoiseshell. Normally the buddleia is teeming with them, but there's nothing. There are plenty of Whites, Meadow Browns and Gatekeepers, and Holly Blues (at least I think the ones below are holly blues) but none of the usual late summer ones at…
2 comments
Read more

- August 06, 2010
Why Big Pony? Why? The name certainly wouldn't make me buy the scent, but then I'm not the target market. It's a classic of its type, this ad: no old people allowed. NO ONE OVER 30 obviously EVER watches polo. 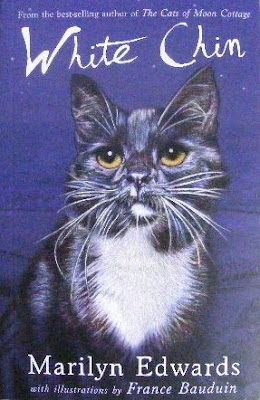 Marilyn Edwards' White Chin was published on 1st August, and it is her first children's novel. White Chin is a young cat, who was abandoned in a wood by two men, and left to survive. He is seen by a girl called Kirstie, who falls in love with him. This doesn't instantly solve White Chin's problems: he goes through several homes before finally settling down with Kirstie.


My initial reaction on seeing this book I have to admit was not positive: the animal story is a very tricky one to get right. there is often not a lot of incident in an animal's life, so the book runs the risk of being a run through of fairly predictable events. Characterisation is often a casualty: the animal either eme…
2 comments
Read more 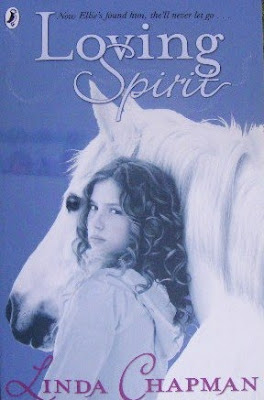 Thanks to Puffin for sending me this book to review.
Linda Chapman has written several pony series: the Secret Unicorn series (which I liked) and several Heartlands (about which I wasn't so keen). With Loving Spirit she's going for an older age group than she's written for of late.
Ellie Carrington, the 14 year old heroine, is from New Zealand. Her parents have been killed in an accident, and her grandmother can no longer care for her, so she's come to England to live with her uncle Len and her cousin Joe. She's had to leave her pony, and the one small flicker of light on the horizon is that Uncle Len runs a showing stable. However, Uncle Len is worlds away from the sympathetic father figure Ellie needs. He is wedded to his work: all that matters is that the stables succeed. Len is impatient, dictatorial: a bully. Cousin Joe, 16, is cowed by his father and shows not a flicke…
6 comments
Read more
More posts