Showing posts from January, 2008
Show All

- January 25, 2008
Last week, we went to see I am Legend , the new Will Smith film. I was really looking forward to it: I like Will Smith (Men in Black) and I knew there were vampiry things in it, but I wasn't worried. For years, I have been a Buffy devotee, and vampires held no terrors for me, particularly not when they were Spike . Oh how wrong I was. I am horribly susceptible to suggestion and atmosphere, and this film had it in loud and horrific spadefuls. Most of the film I spent with my fingers firmly in my ears, and my eyes tight shut. By the time the film ended I was a quivering wreck (my husband was, shall we say, also affected by the experience.) Horror films are something I gave up watching years ago, as I know I then dream, can't sleep, see horrors under every bush.... oh, if only I had known. Read a review at least. That would have helped. But, unlike the Home Secretary, I do have to walk about in the dark . The poor dog has had some rather truncated walks, but by Tues
4 comments
Read more

How not to cook

The Government have just announced that all children between the ages of 11-14 are going to be taught to cook . Obviously for some schools this will be difficult. They have no functional kitchens, and pupils whose families will struggle to provide the ingredients. But I think this is something that is long overdue. My own Domestic Science lessons, in the early 1970s were a bit hit and miss as far as equipping me for life went. All we ever cooked were sweet things, though I shouldn't grumble: I can still do a mean cake. And thinking about it, in needlework I was taught how to hem, sew on a button and basic mending, which for me have been all the sewing skills I have needed. I really learned to cook as my mother was a staunch believer in good, plain nursery food, so I taught myself out of sheer self-defence, from a black and white Good Housekeeping recipe book from the 1950s. My own children's cookery experience at school has been radically different, and their needlework (or T
15 comments
Read more 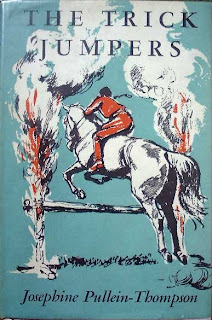 If you'd like to read more (in fact anything, as I haven't exactly said a lot) about my meeting with Josephine Pullein-Thompson, it is now on my website here . JPT used to tell people who wrote to her about Pony Club Camp what happened to Noel and Henry afterwards, but if you weren't one of them, all is, as they say, revealed.
3 comments
Read more

The cat and dog wars 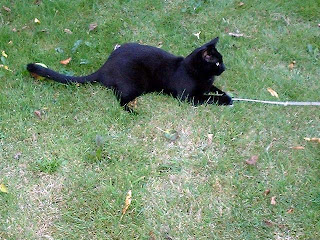 Cats obviously make New Year's resolutions. Since 2008 started, cat has decided she will Reclaim The House. Since the dog arrived, cat has tended to keep out of her way, but now she's begun to come into the kitchen again and march about in front of the dog's nose. Cat comes downstairs with me now first thing, having worked out that when I open the kitchen door, the only thing on the dog's mind is getting outside, doing the fastest pee on record and shooting back in again to get breakfast. So, I open the door and cat marches in, under the dog's nose. You can see the dog's reaction; every day - "It's the cat! I need to chase it! But I need my breakfast more! Darn!" And when I cook in the evening, cat has taken to coming in and perching on kitchen table B. (We have 2 kitchen tables in the kitchen at the moment. We brought the other down from son's room over Christmas so we had space for everyone to eat. And there the kitchen table has stayed. Son
6 comments
Read more 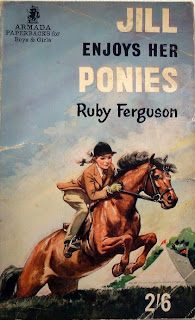 Before I get any further, this is nothing whatsoever to do with Monica Edwards' Outsider . I've been reading Mary Gervaise's A Pony for Belinda , which I found a gentle and undemanding read. Belinda is portrayed right from the off as an outsider and oddity: she is going through agonies at a tea party, in which the children there are dressed in jeans, while she is in a frilly dress. They go to school: she is educated by her grandmother and the Vicar. They are easy in each other's company: she sees almost nothing of other children and sees no reason why she should. It turns out that Belinda is living with her grandmother after an horrific accident when Belinda was a baby. Her mother took her down to the beach but was caught by the tide. Belinda was rescued but her mother was not. Belinda was all her grandmother had left, so stayed with her rather than rejoin her father, brother and two sisters, and so they all stay, separated, until her family moved to the country and t
3 comments
Read more

- January 15, 2008
At last I have got what passes for my act together, and the Gillian Baxter interview is now up on the site. Gillian was great to talk to, and put up very patiently with my losing track and diverting along other paths. To whet your appetite, if you read the interview you will find out which book Gillian wrote under a different name (and I think it will be a surprise) and also what happened to Roberta. And Guy.
Post a Comment
Read more

The Suspension of Disbelief

- January 09, 2008
When I did O' Level English Lit, one of the very few technical expressions that stuck in my head was suspension of disbelief. It's such a grand description for the simple act of leaping headfirst into a book and living in it until you've finished. It is a phrase that's been nudging at me for a while recently, as I've read a few pony books over the holidays that have tried my disbelief somewhat. The main one was Jackie and the Missing Showjumper by J M Berrisford. I know it seems as if I only mention this poor woman in order to put the boot in, but stay with me. The story involves Jackie and her sidekick Babs, both of them all of 13, who are going to spend the Christmas period looking after two showjumpers belonging to a"top-of-the-charts country singer." JMB herself recognised the struggle many of her readers were going to have with the essential dippiness of her plot, and she goes to some lengths to explain how the situation has arisen: the singer can&
6 comments
Read more

- January 01, 2008
A happy and healthy New Year to everyone who reads this blog. The year has ended on a slightly mixed note for us: last week we had the funeral of a friend who died just before Christmas, and yesterday my great aunt died; "full of years", she was 93. On the other hand, we've had lots of parties, some with the people we've been crying with one day and then there we all are, cheerful. We're an adaptable lot, the human race. And changeable; my daughter is now well into the age where her parents are a massive embarrassment. Yesterday evening we went to a big party, along with most of the village it seemed, in a local hall a handy 200 yards away from us. Last time daughter and I went to a party here she was about 6 and we bopped the night away and neither of us cared a jot. I still don't care a jot, but she does. Fairly early on in the proceedings was the Rednex' Cotton Eye Joe: the video gives you an idea of what my daughter was up against with her m
3 comments
Read more
More posts