Showing posts from October, 2007
Show All

- October 31, 2007
Fidra books will be re-publishing Caroline Akrill's excellent Eventing trilogy. Regular readers will know I am a big fan of this: the Fane sisters, for whom Elaine-the-would-be-eventer works are inspired creations and I think these books are some of the very few pony stories to be laugh out loud funny, as well as touching. The scene where the big grey (I am writing this at speed and I can't remember his name) is re-united with his former, now horribly arthritic owner, makes me cry. A few months ago I interviewed Caroline, and the results are on my website here .
13 comments
Read more

- October 29, 2007
One thing I have noticed since we acquired a yellow dog is that she has a magical attraction to mud. We often walk with a friend and her retrievers: 2 flatcoats and a golden, and it is always the blondes who head straight for the muddy squalshy bits. I know that if you're a black or a brown dog of course the mud doesn't show as much, and I do wonder, why, when I filled in the forms for the rescue society from whom we got Holly, I wasn't a bit more specific when filling in the bit about what sort of dog we wanted: I bascially said anything as long as it wasn't about to die, when what I should have said, bearing in mind my aversion to cleaning, was any colour that doesn't show the dirt. In my attempts to avoid a full wash-down situation with buckets and shampoo, I try rubbing the dog briskly with one of our vast collection of dog towels (our towels are all so ancient now virtually all of them are dog towels. She is much better off for them than we are) which doe
5 comments
Read more 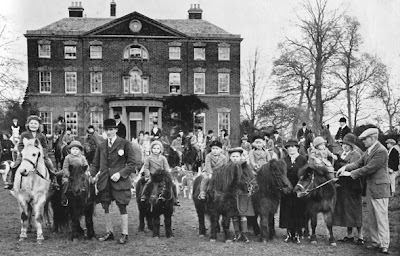 Birte sent me this lovely photograph, which is from Golden Gorse's The Young Rider's Picture Book , published by Country Life in 1936. I love the group of Shetlands, with their solid little riders; presumably solid because they were wrapped in so many layers of woollen vests and tweeds. Is anyone else old enough to remember Chilprufe wool vests? These were thick, scratchy vests, made thicker and scratchier if washed at too high a temperature. A few years ago I found one my mother had saved: so I have proof her washing technique, at least when it came to woollen vests, ruthlessly suppressed comfort in the interests of thickness, and presumably warmth. These vests were a stalwart of my childhood, but by the time I started riding I had rebelled and no longer wore them. Photographs, being of course of real events, transport you much more directly to the past than pictures, which, style of jodphur and total absence of the flash noseband apart, are reasonably timeless. Though thinkin
6 comments
Read more

The Teenageer does Slum Survivor

- October 24, 2007
and no, this is not a comment on the state of his room. This weekend the teenager and some of his friends are going to build themselves shelters and live outside to try and understand what life is like for people who have to live in real slums. They will only be allowed 2 meals a day, and cannot change their clothes. Frankly the last will be of no hardship whatsoever to my boy, but the 2 meals a day will hit him hard. Besides making people understand how many people have to live their lives, the whole thing is being sponsored to raise money for Soul Action. This is the online giving page , and we'd all be very grateful if you could sponsor them. Last weekend the teenager spent camping in the Peak District for the Duke of Edinburgh award, and it was cold, cold, cold. Even my tough boy, who usually strides off to school on the most vile day in just his shirt sleeves (WHY do teenage boys do this?) said he was frozen. I just hope the weather's not too bad this weekend, an
1 comment
Read more

- October 22, 2007
This blog is supposed to be about my gardening attempts as well as books, but you would never know it at the moment. After a whirlwind of activity earlier this month in a desperate attempt to get the front garden ready for its stint as a location for stalls for the church's Scarecrow Festival, activity there has been none. The back garden is a sad, and overgrown disaster. The terrace is looking particularly bad after I took up a couple of the vile concrete slabs to uproot a decent sized rosemary bush which was growing between them, and left the slabs where they lay. I plan to get rid of most of the slabs (they will have a second life either as things to be used by a magician friend, who will balance them on his stomach while someone clobbers the slab with a sledgehammer, or I'll freecycle them, which would certainly be a duller existence than journeying around the county and being smashed up.) Eventually, after meaning to for months, I will replace the evil slabs with gr
2 comments
Read more

Should ponies be pink?

- October 13, 2007
Many thanks to Susanna for sending me the link to this article in The Guardian . It's interesting. As the owner of a girl, I've looked at the sort of covers that are prevalent now on books aimed at girls, and thought "hmmmm" to myself. Aiming books at one sex or the other of course isn't new: in the 1920s to 1940s if you saw a book with girls thundering down a hockey field on the cover you'd be pretty sure boys weren't its target audience. And publishers after all do need to sell the books, and badging them means people who like that sort of book know in advance they're getting something they'll probably like. I do it myself when bookhunting - I can spot a 1970s and older Puffin paperback at 20 paces. And covers do make a difference. My daughter still hasn't read Ballet Shoes , as despite my having several lovely early Puffins, she wants to read the one with the funky new cover. Never mind the fact what's inside is (probably)
5 comments
Read more

What do you think? Should Jill be updated? 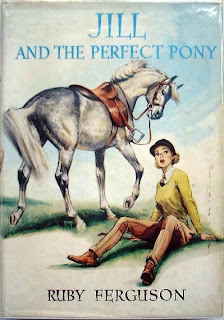 I posted news of Jill's republication on the Saddle-up boards, and some people there thought that the prices in the Jill books should be updated, so I wondered what readers of this blog thought. (At first I thought they meant the original cover prices should be kept too, which strikes me as an admirable idea: after all, the initial Armada paperbacks were 2/6 (12.5 p to those of you born post-decimal) and that seems a darn fine price to me, though I can see that Vanessa at Fidra might not think so....) But anyway. From one point of view, I can see what they mean. When I read a book in which the pony is bought for £15, it obviously reads oddly, particularly if that's the only mention of price in the book. On the other hand, if the characters have been talking about buying sweets for 2d that puts it in context - the more the prices are put in, to me the more normal it seems. And the major problem about updating prices is of course that they will very soon be out of date - w
7 comments
Read more 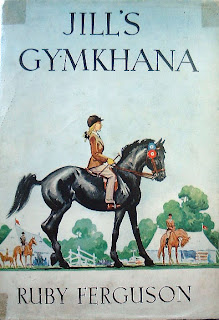 Fidra Books, who as many of you will know have republished Six Ponies and Fly-by-Night , have acquired the rights to all of the Jill series, and will start to issue them next year. They will have the full original text, so Black Boy will be Black Boy, and not Danny Boy or any of the other things with which he might have been afflicted, Challenges for Jill and Jill and the Runaway will head for the hills, and all the Caney illustrations will be back in place. Hurrah! The Jill section is far and away the most popular section on my website, so hopefully these new additions will mean she can enchant today's pony-mad children. And their parents, of course.
7 comments
Read more

- October 02, 2007
We decided a couple of weeks ago to go wireless, as this would mean I could move the computer back down to the study, rather than upstairs where it has been since we got broadband. One penalty of living in a very old house is that it has had odd things happen to it over the years, which as they would cost a fortune to sort out and there are more important things needing attention, like buildings actually falling down, we have learned to make do with where we can. So, when, after 3 BT engineer visits and countless hours on the telephone, we were told there was only one place broadband would go unless we completely re-did our telephone wiring from scratch, we decided to live with it. But wireless, we thought, would solve all our problems. Two weeks of mind bending frustration later, I am here to tell you it did not. Initially all was well, but then day by day the service got worse and worse, no matter what we did. Last week I ended up with no internet connection at all, which when
Post a Comment
Read more
More posts