Showing posts from March, 2018
Show All

A supermarket for horses: the Horse Bazaar of Baker Street 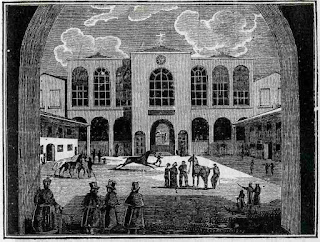 The vast shopping centre is something we’re all used to, but it’s not where you’d go if you wanted to buy a horse. In the early years of the 19th century, it is exactly where you would have gone, particularly if you’d wanted to mix with the fashionable. I must admit that before this week, I’d not given a great deal of thought to how horses were bought and sold in the nineteenth century, but I was asked if I knew about a riding school that had once existed in King Street, off Baker Street in London. I didn’t, but I investigated. I found that there had been a riding school which occupied the former King Street Barracks, established in 1822. And it was far, far more than a riding school. Whatever your equine need, the Horse Bazaar could meet it: horses, carriages, equipment – it was all there. Horace Wellbeloved MA wrote an 1826 guidebook for visitors to London so that they missed none of the delights it had to offer. London Lions for Country Cousins and Beyond included the Horse Baza
Post a Comment
Read more
More posts