Showing posts from September, 2007
Show All

- September 26, 2007
I've just been asked a question about the order of the Jill books. In the original order of publication, Pony Jobs for Jill is the eighth book, (and it says quite clearly on the spine of the first edition hardback: "This is the eighth Jill Book"), but when the paperbacks came out Pony Jobs (and Challenges , as it became) are book number 6. Does anyone have any theories about why?
4 comments
Read more

- September 21, 2007
Last week, Mother Hen, the oldest of our hens, vanished - not even a few pathetic feathers. That same evening, we found Matilda on the wrong side of the gate. We have no idea what happened. There has been a bird of prey hovering around, but it doesn't look big enough to have taken her, or dumped Matilda outside the gate. I am not good on raptors, but I think this is a sparrow hawk, which I would have thought was too small. Hen harriers are presumably called that for a reason, but I'm fairly sure we don't have them round here. Sigh. Mother Hen was by far the nicest and most friendly of our hens, and an excellent layer too. So, we are left with Matilda, whose tail, I am pleased to report, is coming on nicely and she's looking a lot better now she's nearly finished her moult. In mid moult she looks as if she is falling apart. Feathers trail from everywhere and I was very tempted to pick her up and give the feathers a helping hand, but she can be a bit pecky
2 comments
Read more

The worst pony book ever?

- September 14, 2007
I was inspired by reading this post on another blog, as I have a few candidates of my own for this. It's quite rare that I fail to finish a book, but I did with Joan Dicken's Jill and Prince the Pony, which is real grade A stinker. I doubt even as a pony-mad child if I could have struggled through the waves of boredom which the pedestrian plot and characterisation roused in me, but as an adult I just couldn't. I failed. Others I struggle with are Judith M Berrisford's A Pony in the Family series. This is supposed to be an educational series, teaching children how to look after ponies and ride. The educational bits are triggered when the hapless younger sister gets something wrong, which is when her hideously sanctimonious elder sister sails in and patronises her until any realistically written character would have shoved the elder girl face first into the muck heap and made sure she stayed there for a while. But no, she takes it all. The whole think makes m
11 comments
Read more

- September 07, 2007
I don't normally blog about my husband and children as they never asked me to blog in the first place and I don't fancy evil stares at the dinner table when I have written about something they'd rather I didn't. However, I have the teenager's full permission for this one. At the beginning of the week, before they'd gone back to school, I came back from a journey out with my daughter, and wandered upstairs to tell the son I was back. I could hear music coming from his room, but there always is. This piece did sound familiar, but in a very odd way. Once I'd got as far as The Room, I'd recognised the music: it was Simon and Garfunkel's Sound of Silence , but it didn't sound quite as I remembered it - I thought that it was one of those sort of combined efforts something like Simon and Garfunkel feat. Soggy Dogs. Sampling, that's the word. Then I saw that son had fixed up my record player in his room - quite a feat in itself as it has a thousa
4 comments
Read more 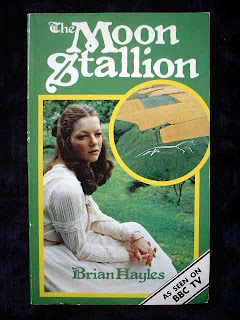 I said I would write more about this, so here goes. The book is a novelisation of a 1970s BBC serial (which completely passed me by). It's not really a classical pony book - more a story that happens to have a horse in it. The Moon Stallion of the title is a white horse who is connected to the White Horse of Uffington. The story is set in either late Victorian or Edwardian times (it's not specific) and opens with an archaeologist, Professor Purwell, and his children, Diana and Paul going to Uffington. The Professor has been asked by Sir George Mortenhurze, a local squire, to seek out the true facts about the historical King Arthur. It soon emerges that Mortenhurze, and Todman, his stablemaster, and it turns out, a horse warlock, have designs on the Moon Stallion - Mortenhurze because he wants revenge on it for having, he thinks, caused the death of his wife, and Todman because he wants the power the Moon Stallion has. The plot centres around Diana, who is blind, but who has
5 comments
Read more

- September 04, 2007
I am. Having had a week off (spent in Scotland, and utterly wonderful, about which more later) I have now come back to earth with a big, fat bump. Just before we went away someone said to me, having just told me an alarming bit of news about one of the things with which I am involved: "I hope it won't spoil your holiday." "It won't," I said. I may be a bit short on time-management abilities, memory skills and a host of other things, but at putting things I don't want to think about firmly out of my mind for the week of my holiday I think I have few equals. However, even I cannot fend off the thought of the Inland Revenue for ever (which wasn't by the way, the alarming thing: that turned out to be merely worrying), so I am now in the throes of finalising the business accounts. Every year I say firmly to myself that I will make sure every bit of paper is irretrievably filed, but every year something goes missing. Most years it has been a ban
1 comment
Read more
More posts