Showing posts from January, 2009
Show All

Foggy Day and a Funeral 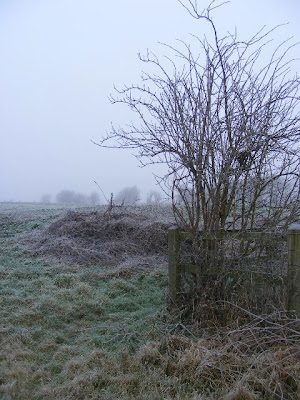 Overslept today, so took dog for a bit of retrieval work in the field. A bleak and foggy day, but beautiful, and accompanied by the clangs from the graveyard next to us, as the gravediggers dug June Wilby's grave. She was buried this morning. Her grand daugher wrote the most beautiful poem for her. She was a lovely lady: one of those who was genuinely interested in everyone she talked to. I always felt better after I'd talked to her, even if we'd just said the most commonplace things. I managed to shoot back up to the field after dog had finished retrieving (she loves it but we still don't have the giving it back bit sussed yet, to put it mildly) and photograph before the frost went. The old guard hens do not mind the frost. The only weather that makes them reluctant to get out of bed is rainy wind. The new bods don't quite feel the same. They're not quite used to the change in temperature or the increase in wind. The ho
4 comments
Read more 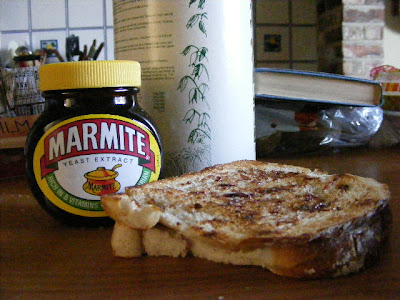 Clarrie was looking a bit seedy over the past couple of days. The other three newbies have taken to their new surroundings with vim, but she has been a bit off; staying with the others, but not diving in with the gusto the others have. I was wondering whether I'd have to whisk her indoors and install her next to the Aga (do wonder what dog and cat would make of that) but after I took the hens up the ends of a white loaf yesterday, and she fell upon it with glee, I haven't been so worried. I did hover over the internet though, looking up ways of cheering up hens, just in case. The eglu site suggested feeding marmite toast to your new hens, presumably to cheer them up. I think Clarrie is maybe a sensitive hen, who is missing her original home, so I hope the marmite toast will convince her that despite the windy prairies; so unlike their nice enclosed garden, and the bolshy bantams, that it is ok here really. So, £2.77 later (Marmite has gone up a bit since I bought it last)
2 comments
Read more 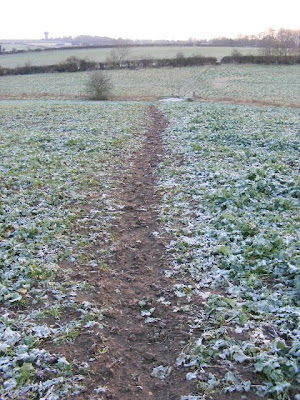 Frosty walk today, thank goodness, so the mud was blissfully crunchy. I keep thinking I must find out what crop this actually is: a member of the cabbage family I think, but it's certainly a new one for this field. Mallow leaves aren't that palatable to hens - why I don't know, and I've never tried one myself. The newbie hens hadn't come across mallow, so it was interesting watching them all trying it and deciding one after the other that it wasn't worth the bother. I wondered if they'd be led by Scrabbles but no. They all had to make the discovery for themselves. Mallow leaves are quite spectacularly beautiful with the frost. Back across the valley - clear for once. After this point I ran out of battery. Well, to be accurate, I didn't - am feeling just about human after getting over my annual chest infection, but the camera did.
2 comments
Read more

Then there were seven 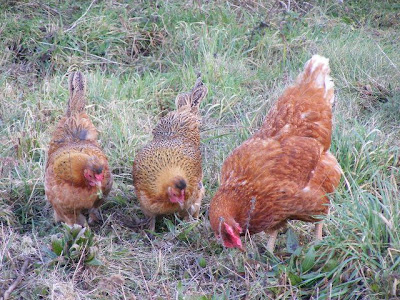 The new hens have arrived. After much mulling we decided to put them straight in with the others overnight, when they were roosting, and so, when they appeared in their cardboard boxes on Saturday night they were installed on the new perch and off we went, hoping all would be quiet, and forgoing any idea of a Sunday lie-in so we could be there at first light to hold chickeny claws if need be. Sunday morning came, and we went up and opened the door. Our original three shot out as normal, and then realised there were more of them than there had been the previous night. The new bods slowly made their way outside, but ignored the old guard the moment they sighted grass. Having destroyed their original garden, grass is something they haven't seen in months. Mary, boss Bantam, decided enough was enough, and weighed into Pandora, the Light Sussex. She found out in very short order that unlike Matilda, Pandora was not bothered by someone small and nasty, and not only that, but Scrabbles,
11 comments
Read more 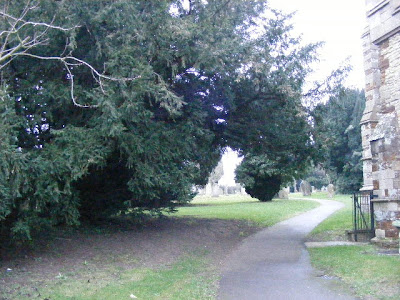 We have two main walk routes; this is the second. It starts off uneventfully through the churchyard; and then heads off down mud alley to the woods. I hadn't walked this way since the thaw, because I knew it would be like this: Just as bad as I had thought, but I keep telling myself lugging that much mud around on the boots is good for my thigh muscles. There is a terrible pigeon problem locally. I have disturbed flocks that must number in three figures, and they've wrought havoc on the crops. An awful lot of feedsacks on posts have materialised, but there is also this splendid scarecrow. So clever. Just round this corner I saw a muntjac. Dog completely missed it, despite being much closer to it than me. She did pick up the scent when she crossed it but decided not to hurtle off into the quarry (left) to go after it, thankfully. The muntjac have been much more obvious than normal. Yesterday I saw one about to cross the road as I was driving out of the villag
2 comments
Read more 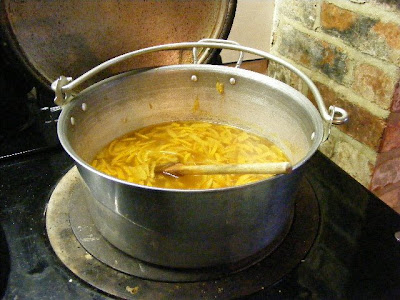 My life doesn't tend towards domestic goddessery , though I do love baking on the rare occasions that I actually get the time. Marmalade making, which seems one of those things that is the entire essence of goddessery, is something about which I have very mixed feelings. Firstly, I can't bear the stuff, but my husband loves it, and I do like doing something for him I know he'll like (makes a change to my banging on about any of my particular hobby horses). I also like the ego stroking that goes with people liking the end result. Despite hating marmalade myself, I'm told I do a pretty decent job. The same is true for cooking sausages, which I also don't like. Not entirely certain why this is. I do hate though, the endless faff which making marmalade seems to involve, though this is partially my fault for choosing the more intensive jelly method. My friend Patricia, who makes an incredible 100 jars a year (yes really) chops everything up in one go and then cooks.
4 comments
Read more

K M Peyton: No Turning Back 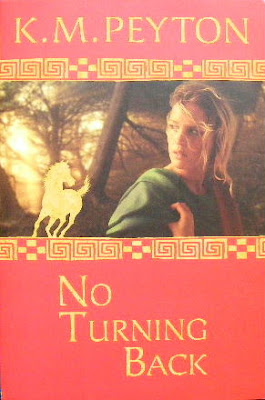 No Turning Back Usborne £5.99 No Turning Back is the sequel to Minna's Quest , the first book in K M Peyton's trilogy set in Roman Britain. When we last saw Minna, she had just saved her settlement, Othona, after a brave ride over the sea to Camulodonum to summon help. No Turning Back picks up the action when Minna's love, Theo the centurion, is about to receive his next posting and move away from Othona. Minna is distraught: she does not want to stay in Othona and marry, but to follow Theo. This is not a bad book: as ever, K M Peyton tells a good story, but it is a deeply frustrating one. One of the reasons I like K M Peyton is the spiky independence of her characters. So what does Minna do when Theo is sent to Camulodonum? Runs off after him. I suppose that you could interpret this as her independence - her other option is to stay at home and marry, but I find it incredibly frustrating that everything Minna does is seen in terms of Theo. He's sent to Camulo
Post a Comment
Read more 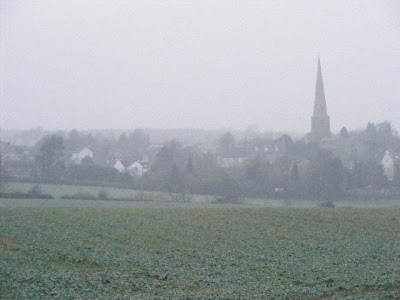