My life doesn't tend towards domestic goddessery, though I do love baking on the rare occasions that I actually get the time. Marmalade making, which seems one of those things that is the entire essence of goddessery, is something about which I have very mixed feelings. Firstly, I can't bear the stuff, but my husband loves it, and I do like doing something for him I know he'll like (makes a change to my banging on about any of my particular hobby horses). I also like the ego stroking that goes with people liking the end result. Despite hating marmalade myself, I'm told I do a pretty decent job. The same is true for cooking sausages, which I also don't like. Not entirely certain why this is.

I do hate though, the endless faff which making marmalade seems to involve, though this is partially my fault for choosing the more intensive jelly method. My friend Patricia, who makes an incredible 100 jars a year (yes really) chops everything up in one go and then cooks. I pre-cook the oranges, and then chop the soft peel, cook the scooped out pulp, strain and then cook. I think one reason I don't like doing it is fitting it in - it is after all, interfering with time I could be spending reading. So, I moan and groan about the process to myself as I'm doing it, though have to attempt to keep this from my OH, as I don't want to induce guilt. On the other hand, I do like having my bit of a moan. I just have to be careful where I aim it.

And think too about the money saved: not as much now alas, as I have to rely on supermarkets now our last local greengrocer closed, but still a decent amount. Anyway, here are a couple of jars. Only 20 more to go. 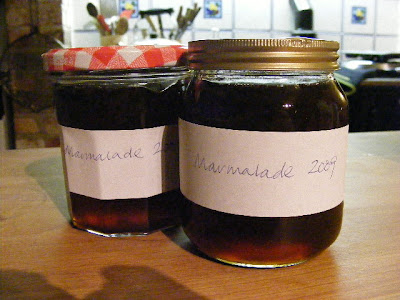 Unknown said…
I guess the marmalade making makes the house smell good. And it's satisfying to do something with such a tangible end result, even if you don't eat it yourself. At least it will come in handy for donations to fetes etc.

I admire the big preserving pan you have on the aga/range. Not sure I'd be able to lift it with stuff in, but it does look very domestic goddess.
13 January 2009 at 12:01

Jane Badger said…
The thing is that I have a very limited sense of smell! But it does make the house smell for everyone else (daughter can recognise the smell of marmalade cooking at 100 paces.)

The preserving pan isn't as heavy as it looks, thankfully, though it does have an alarming tendency to tilt unless grasped firmly either side!
13 January 2009 at 18:06

Juxtabook said…
I sympathise entirely! I cook jars and jars of chutney every year though I don't touch the stuff myself. My husband likes it and others like it, and it makes good presents, and it is cheaper and healthier than the bought stuff (and I hope, tastier!) so I keep doing it. I do get a lot of satisfaction out of doing it once it is done, but, oh, the thought of it all in advance when the first apples start demanding my attention. I like a moan about it then too! It does not smell particularly nice (all that vinegar) so your marmalade has the advantage there.
15 January 2009 at 11:49

Jane Badger said…
Juxtabook - I do chutney too, so we must moan together when the apple season starts! I do completely agree with you about the reek of vinegar. It seems to take over the whole house (WHY does chutney take hours of boiling when jam doesn't) and then of course you have to wait months till you can eat the chutney, which Miss Greed here doesn't like!
16 January 2009 at 11:43