Should I have read the book?

- January 07, 2009
I'm just not good at seeing adaptations of books I know well. The place in my brain where the books live is too ready to charge in, saying "Shouldn't that be happening now? And what's happened to so-and-so? And x should happen next. I wonder if it will?"

It's not so bad if I see something for the second time: I watched The Lion, The Witch and The Wardrobe for the second time over Christmas, and because I knew exactly how much had been missed out or changed, I was able to turn the brain off and watch the film as it was (and consequently, enjoyed it much more than the first time). This was a blessed relief to my daughter, who normally has to suffer me sitting next to her at films, hissing and muttering.

I tried and failed to read Cornelia Funke's Inkheart, about a father who, when he reads aloud, brings the characters quite literally to life, but went to see the film with OH and daughter, and thoroughly enjoyed it. The initial scenes set in book shops and markets were so convincing I could nearly smell the books - I can't think when I've enjoyed a children's film more, but would I have enjoyed it as much had I read the book? Alas, probably not.

I think the problem arises when the adaptation is supposed to be more-or-less faithful. If it is, then I expect the book. Lost in Austen, which takes Pride and Prejudice and gallops off with it, slinging all convention to the winds, I loved as I had no expectations of it at all.

My inability to batten down my brain meant that, alas, I didn't enjoy the National Theatre's production of War Horse, Michael Morpurgo's story of Joey, who is whisked away from his life as a Devon hunter and farm horse to serve on both sides in the First World War, as much as I thought I would. It was deeply frustrating. Try as I might to get my brain to SHUT UP and stop providing the next plot line or piece of dialogue it kept piping up. My irritating brain wasn't enough though to spoil the magical way the puppeteers portrayed the horses. It was staggering: several people working as one to show just how a foal or a horse moves. And they were so accurate too - the twitching of the ears; the angles of the heads. Brilliant. 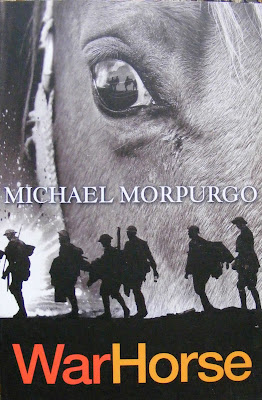 The staging was marvellous too; minimalist but evocative.

The dramatisation was, in the end, just about enough to overcome the hearty dislike I took to Albert, Joey's young owner, who seemed in the play to think that the way to calm a foal is to run round and shout at it, rather than the gentle soothing he does in the book. Albert in fact remains at pretty much the same level emotionally throughout most of the play, turning him into someone I completely failed to recognise.

Obviously (or maybe not - perhaps it might be possible) Joey no longer tells his own story, as he does in the book, and this means that we, the humans, are making the judgments on the pity of war, responding to what we see rather than seeing it all through the eyes of an animal who does not take sides, but cares most about the way he is treated. Nothing can take away from the dreadful pity of war, but it is the book's brilliance at describing war through the eyes of a horse that I missed.

That is not to say that the production is not moving: it is. I still cried. I suppose the problem I had is that I no longer felt I was looking at war through the eyes of a horse, and that, I suppose, I can only do via my imagination, which is why the book will always be superior.
The Horse - TV The Horse - visual media