Constable: £7.99
This is yet another book that's been in the review pile for months: so long, in fact, I can't remember when I got it.
It's about a rescue horse: a Standardbred mare called Lay Me Down, and the woman who rescued her, Susan Richards. Lay Me Down was rescued when she and her companions were seized by their owner, who had neglected them so badly they were nearly at the point of starvation. At first, it wasn't even clear if Lay Me Down would survive, but she and her foal both did. The foal was reclaimed by the abusive owner, who had to sign all the foals over to his vet in lieu of fees, but Lay Me Down stayed. 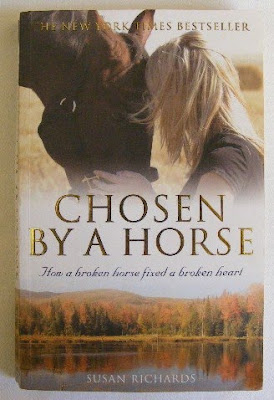 She really was a quite exceptional mare, and Susan Richards shows you just what a complete sweetie this horse was. Despite the horrors she had known, she bore no one any malice, and was always accepting and kind: no mareish nasties at all, unlike one of Susan Richard's other horses, the Morgan Georgia, who was the ultimate in mareish sass. Susan Richards does wonders in portraying this mare. Thinking back over the horses I've known, I've known difficult mares by the bucketload, and I've known mares who would put up with anything a child chose to do to them, but I don't think I've ever known a horse as benign. The animal in my life most like Lay Me Down is in fact my dog, Holly, whom we took on at the age of 15 months after she'd ping ponged in and out of 5 homes. Susan Richards describes Lay Me Down thus:

Unlike me, Lay Me Down seemed to feel no rancor. In spite of everything, she was open and trusting of people, qualities I decidedly lacked. It was her capacity to engage that drew me to her, that made me aware of what was possible for me if I had her capacity to... to what? Forgive? Forget? Live in the Moment? What exactly was it that enabled an abused animal, for lack of a better word, to love again?

Alas, Lay Me Down is not done with suffering once she is rescued. She develops a tumour which pushes out her eye, and it is inoperable.
The picture of the horse drew me in, but Susan Richard's own experiences didn't, and I'm not quite sure why. I think one thing that made me disengage from her was the episode of the foal being taken away, or to be more accurate, what didn't happen afterwards. After the grim emotional haul of the foal being parted from her mother and carted away after a Judge decreed that the owner could reclaim all the foals from his herd, in order to meet his debts, I expected that we'd be told what happened to the foal after she was taken in by the vet - she was too young to be weaned, apparently, so what happened next? This complete silence was a little odd. Perhaps the foal's story didn't fit into the book, but the foal simply isn't mentioned again after she's hauled away. Susan Richards' own reaction seemed quite profound, and so I expected her to at the least, try and contact the vet and buy the foal back. Maybe she did, or maybe she didn't, but I couldn't quite remove the foal from my brain, and she haunted the rest of the book.
Perhaps tellingly, the book moves on from the foal's removal to a description of how Susan Richards became the person she was: her mother died at the age of five, and then she was shunted from one abusive relation to another. I couldn't help but draw parallels. I'm glad Susan Richards felt Lay Me Down had unlocked something in her; and she gave Lay Me Down the best and most loving of care as she became more and more sick.
That's not to say this is a bad read: it's incredibly involving, and of course the end is tragic and you will cry bucketloads. Just can't get that foal out of my mind.
Review

haffyfan said…
I also read this recently and I too wondered about that poor foal. The story in general was not what i had expected to be honest and I was rather dissapointed in the whole thing finding it a big of a drag to finish. On the otherhand my mum thought it was wonderful and cried her eyes out.

I had just assumed it would go down the rehabilating the horse route once the mare was home (which i suppose it did but not in the manner I had expected)but was that horse for real (?) I mean she had no problems/hang ups what so ever despite everything, unlike that fiesty filly we met in the first chapter!
28 November 2009 at 15:09

Jane Badger said…
Haffy, I'd love to meet a horse like that. She sounds the absolute dream horse. I'm glad I wasn't the only one who wasn't swept away by the book. After I'd written the review I had a look for other people's thoughts. Mostly they seem to be like your mum!
30 November 2009 at 12:38

Anonymous said…
I too, was eager to learn what became of the foal..such an obstreperous, irrepressible little filly- given the proper channeling, imagine what she could become!
21 June 2012 at 18:21