The girls achieved publication early. Their first article, written by all three, appeared in Riding Magazine in January 1941. ‘Cocktail Capitulates’ is a straightforward account of one the ponies they were asked to rehabilitate. Cocktail was “a part-bred hackney cob, who had lost his last situation through bucking.” ‘The Road to Ruin’ was the next Pullein-Thompson effort to appear. Published in the summer 1942 issue of Riding, it's a morality tale about the stupidity of sentimentality. Jester is a pretty grey pony who has gone to the bad. He has forgotten his early youth and his glittering early career, but remembers all too well his second home and owner, “who by sentimentality had turned an almost perfect pony into a malicious and stubborn animal.” Jester learns that by bullying he can get his own way, and ends in the sale yard without a warranty, a rearer who hates other horses and humans. 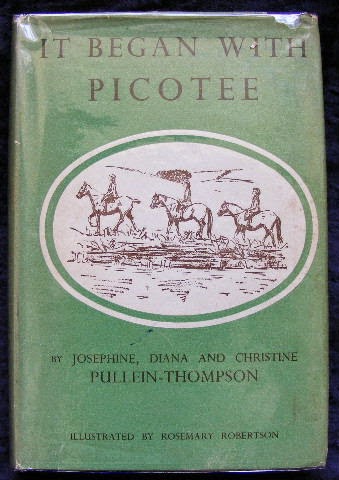 Many pony stories slip self-righteousness, and this one does:

“Never again will he canter gaily round the show ring, listening to the tumultuous applause of the spectators. No! He will only feel the hard and slippery road beneath his feet, he will breathe the city’s smoky air and hear the sound of traffic all day long because of those ignorant and incredibly foolish people who spoilt him, and who, no doubt, are still under the impression that they are kind to animals.

Nevertheless the story shows the Pullein-Thompsons were not necessarily going to follow the conventional model.

Their next joint effort was It Began With Picotee. Although not published until 1946, it was finished by the spring of 1942, when Josephine was nineteen and the twins seventeen. The story, written during the ponies’ days off “emerged slowly as we argued over every word,” and “giggled a lot.”

It Began With Picotee, although written by all three, does have a unified voice: it is very difficult to point to any particular bit as showing one sister’s influence more than another.  Olivia, Bridget and Griselda Douglas own Picotee, and are then lent Tony.  Then they buy a chestnut foal they call Pengo, and then they agree to school Colonel Selcombe’s half Shetland, and then they borrow Mrs Baxter’s two ponies.... And they end up with plenty of ponies. The ponies were based on those the Pullein-Thompsons themselves sold:   Cocktail of their earlier story reappears as Bronx the bucker. The basic plot, of girls riding ponies no one else wanted to so they could be sold on, was based on life. That the Pullein-Thompsons were fully aware they were fictionalising life is clear. The Douglases plan to write a pony book to make money:

“It could be almost a true story, and none of the ponies need be stolen by gypsies or win at Olympia, as they do in most books.”
“It might be rather dull,” I said, “if it was only about the things we do, especially if we put in all our quarrels and arguments.”

This is a little ironic, bearing in mind all the Douglases ever, ever, ever do is ponies.  And eat the occasional meal. And go into town occasionally to buy something horsey.  The book is not without its faults: the action is episodic, and the characters interchangeable and derivative: narrator Griselda has more than a passing resemblance to Jean of A Pony for Jean, though without Jean’s occasional focus on other things besides ponies. It Began With Picotee does though show the elements all three sisters developed in their books; the focus on the rider; that rider riding well, and realistic pony adventures.  They took what they knew, and worked with it.
PBOTD Year of Pony Books