Horseboxes are such cumbersome things: even your modern day gleaming Oakley is a lumbering beast. I do have a little difficulty imagining one whisking through time, but I suppose the idea’s no more preposterous than a police box would have been in the 1960s, whisking Dr Who through time and space. But anyway, whisk you through time and space is exactly what this horsebox does. I am, as you will probably have gathered from the Dr Who reference, partial to time travel, and I’m also partial to historical novels, so this once I was over my reaction to the title, this book was right up my street. 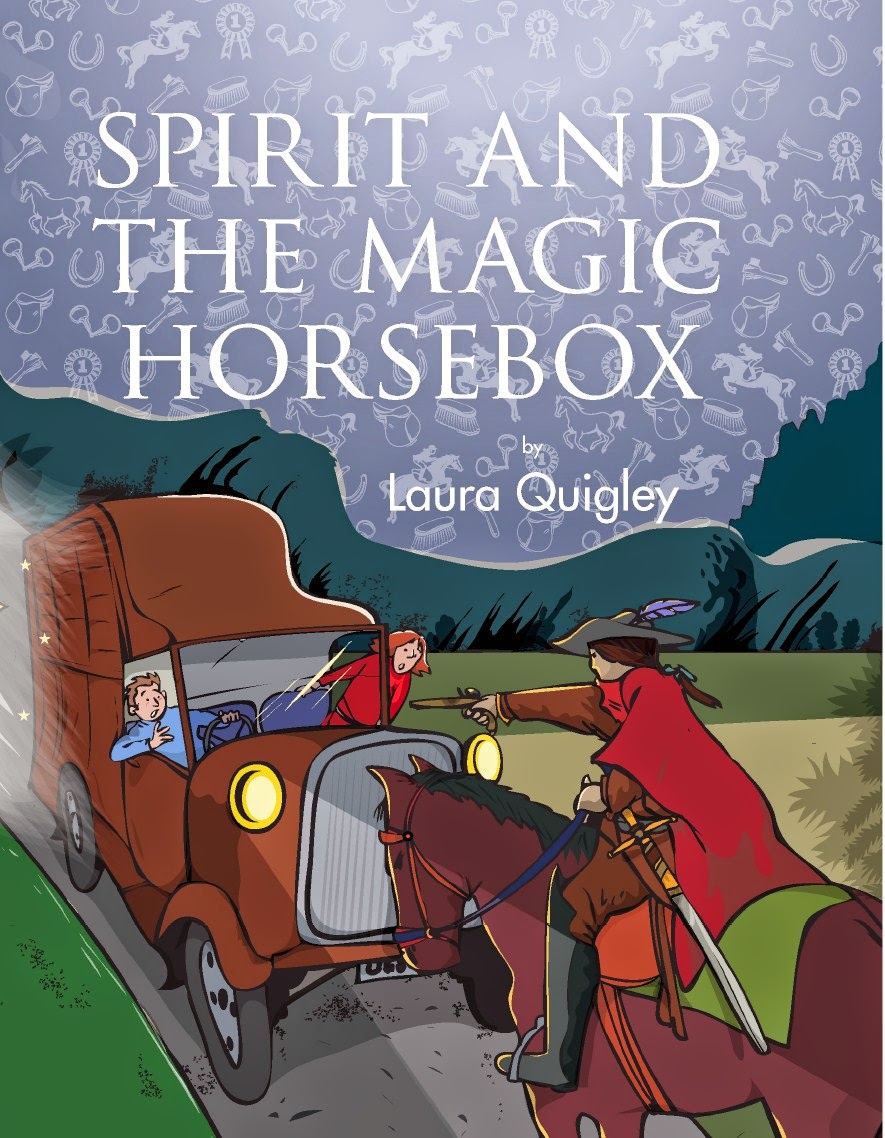 The book’s two main characters are those stalwarts of 21st century pony fiction: the child without a full complement of parents. Megan has moved to the country, and a flat at the farm where Josh lives with his grandmother. There used to be horses at the farm, but they were all sold when Josh’s parents were killed. Bored one day, Josh and Megan investigate one of the barns they’re not supposed to go into, and find an old horsebox. With a horse in it: at least they can hear, plain as plain, the sounds of a horse. Except when they finally fight their way through the mess of stuff in the barn, the horsebox is empty. And when they investigate the cab, they inadvertently start the horsebox, and find themselves back in Cromwell-era England. There they get involved with highwayman Tom Faggus, and his amazing horse, Winnie.

The horsebox ties the story together as Megan and Josh whisk backwards and forwards between the modern day and Cromwellian, and later Arthurian, England. Besides the general difficulties attendant on journeying back to a Britain beset with war (Arthur) and post-Civil War problems (Cromwell), the duo also have to contend with the Eberdonn, a mysterious race of people who certainly don’t have humanity’s best interests at heart. For me, the historical stuff would have been enough on its own: there’s more than enough meat in the two periods Laura Quigley’s chosen to make a thoroughly interesting plot. In fact, just one historical era would have been enough for me. Tom Faggus and his doings, contrasted with the 21st century without the detour into Arthuriana would have been quite enough. However, for an audience who don’t get as much history as they used to at school, it’s perhaps not a bad thing to get acquainted with a bit more, even if Arthur lends more fantastic glamour to the plot than solid historical fact.

You might be wondering what the Spirit of the title has to do with anything,  and you do have to wait quite a while until he makes a meaningful appearance. I think that the author inherited the basic plot and title from another author, because if Laura Quigley had been left to her own devices, I suspect Spirit wouldn’t have appeared at all. That said, the author juggles her multiple plot lines well, and I was certainly keen to find out what happens next. The historical detail rings true, and Josh and Megan are well enough drawn to provide the central focus to the story, although the dialogue is occasionally rather stilted. Laura Quigley’s good at the little details of teenage angst: Megan’s obsessive checking of her phone to see if anyone’s been in touch rings lots of bells. To her old friends, she’s out of sight and out of mind. Josh is well done too, and I particularly enjoyed his attempts to find 17th century veterinary care for the horse he rescues.

For the die-hard pony fan, I expect that this book will not have enough pony in it. It’s fairer to say it’s a time travel adventure in which horses play a part: they’re certainly not the centre of the adventure, and they are written in an oddly arms-length fashion: I get the feeling the horses are not the author’s main interest. That said, there was one particular episode that took me aback. Josh reads up about the highwayman Tom Faggus , and finds out he was hanged, and his horse, Winnie,  was killed. Josh immediately decides he must go back and rescue the horse. Ah, I thought. What about Tom? Josh says, a couple of pages later:

“But he just had to save Winnie. Of course they would try to save Tom too, maybe, if they could, but Winnie, well she was just an innocent horse, wasn’t she? She certainly didn’t deserve to be shot.”

I’m not sure I’m happy going too far down the animals are more worthy than humans of being saved route. Tom Faggus is portrayed in the book as a thoroughly good sort, so to write him off completely just because he doesn’t happen to be an animal jarred with me. I have to say (and this is the spoiler bit) that when it comes to it, Tom does alright.

I do have quibbles with this book, but I came down firmly on the side of enjoying it. Spirit and the Magic Horsebox is an exciting read: it’s a promising start to the series.