- November 16, 2014
I read the G for Georgia series by Mary Gervaise because Armada badged them as pony books. It's fair to say the series isn't really a pony one: yes, there are ponies, but they're not really the central point of the series. School, and family, are far more important components of the plots. 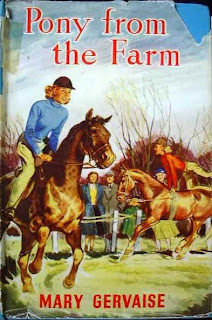 Pony from the Farm (1954) is (along with A Pony of Your Own) something of an exception, because it's centred around a trick ride that Georgie Kane's friends, Ermyntrude and Susan, organise in order to raise funds for one of Mrs Kane's pet charities. 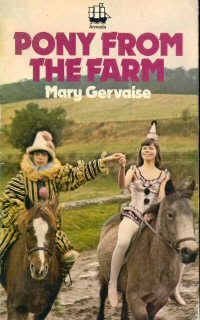 So far, so conventional, but there's a tragedy in this book: Susan's beloved mare, Black Aggie, dies. It's a tragedy that Mary Gervaise handles with sensitivity, and which sees her writing at her best, as we see Susan's grief, and guilt, and the other characters' response to it.