- November 17, 2014
Today's PBOTD is one of its author's favourites amongst her books. Cassidy in Danger (1979) is the story of Katy, who is sent to stay with her godmother. Katy's had a wandering existence with her mother, never settling anywhere for long. She has few friends, and because she's moved from school to school, she can't read. Much of her life is devoted to hiding the fact that she can't do what everyone else seems to do without question. 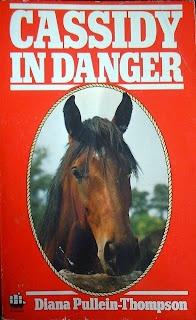 While Katy's staying with her godmother, she's looking for friends. Her first friend is a pony grazing in a nearby field. She also makes friends with a boy who lives nearby, and his rat. No one is supposed to go near Cassidy, the pony, because he's dangerous. Because he's dangerous, his owners are going to put him down, but Katy fights for him, and at the same time, she begins to find her own way through her difficulties. 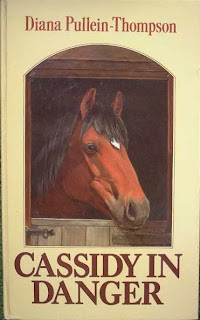 It's interesting that it was only when Katy made a break with her family that she manages to find her way. It's something you could argue was reflected in her creator's life. When I interviewed Diana Pullein-Thompson, she talked about her books, and about how many of her characters were, at the start of the book, on their own. Generally, by the end of the book, they have managed to find friends. Diana felt this transition reflected her own childhood.

"Cassidy in Danger, she’s on her own. The family in Pony Seekers don’t have outside friends. Ponies on the Trail – just them all together. I think it’s because that’s how it was for one, really. ... We were cut off, you see. We had no friends nearby. [Living near us were] three single women, of course, who lived with mother. We always had a terror we might become like them. We didn’t have any children friends in the village at all."

I asked her when she and her sisters started to make friends outside the family.

"We made friends with pupils quite a bit. And [when] I became political, because I became a Young Conservative, because Labour was in and when you’re young, you react about what’s there. Everything was still rationed.... I made a lot of friends there. And when I left and came to London I made friends then. I did find it very difficult to make friends actually. [But in the end] I found it quite easy to have friends. It didn’t damage me permanently." 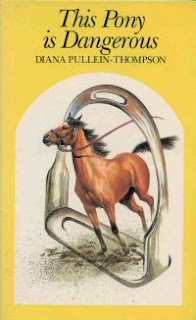 It's that sense of hope that you find in Cassidy (later republished as This Pony is Dangerous), and the book is a good and uplifting read.