- November 26, 2014
Gillian Baxter was an author who tantalised me. In my pony book reading childhood, I knew she existed, because her books were advertised at the end of some of my pony books, but I never found one, not a single one. I forgot all about her until I started thinking about buying pony books, and came across a book dealer called Louise Simmonds, who ran a company called Ozbek Books. I found her on the internet, and she sent me a catalogue. I was thrilled by the idea of a catalogue just devoted to pony books, but did wonder just how much there would be that I didn't already know, because I must have pretty well every pony book that ever there was, mustn't I? 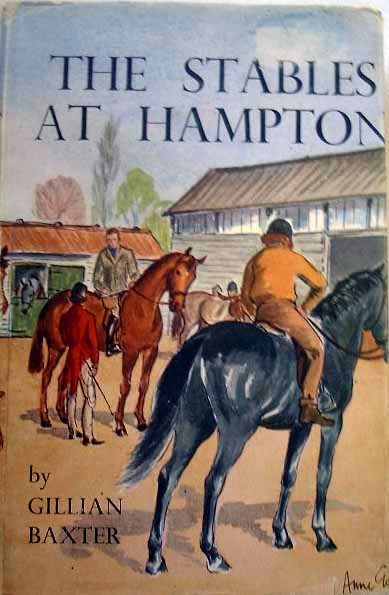 How wrong I was. The most exciting thing though was to see some Gillian Baxter paperbacks listed. Louise wrote great catalogue descriptions, and she was obviously very keen on the Gillian Baxters herself, so I ordered as many of the paperbacks as I could afford. Gillian Baxter, I have to say, was well worth the wait. Shortly after this, I went to a book fair in Northampton, and bought three Gillian Baxter hardbacks, one of which was The Stables at Hampton (1961).

It's the story of Ginny, who rides at a terrible riding school in London. When its owner is put in prison, Ginny manages to find a job with Tamara Blake at her dressage stable. Tamara is not an easy character at all. She's been badly burned in a fire, and her instinct is to push away anyone who offers her help, so desperate is she not to be patronised or pitied. Right until the end of the book, the reader doesn't know if Tamara will remain locked behind her prickly walls.

Ginny doesn't have an easy time of it trying to get used to the very different standards of a dressage yard. Gillian Baxter is excellent at showing the realities of a life working with horses. When she was 17, she started as a working pupil with Robert Hall at the Fulmer School of Equitation.  It was demanding work: Hall had two yards: “One of my first jobs was to wash all the tails of the riding school horses: they hadn't been touched for weeks, only a quick brush.  His other yard had his Lipizzaners and dressage horses and it was absolutely perfect.  I had to groom the dressage horses, and when I did I had to knock out the curry comb on the floor outside so he could check how much grease I was getting out!”

The Stables at Hampton isn't always the easiest of books to track down, but it's well worth it. It's quite possibly the first pony book to be exclusively concerned with dressage as an end in itself, rather than as a means to improve your jumping and cross country riding.