- November 20, 2014
There are books which change the way you think about things, and Jago was one for me. It's about a Thoroughbred who could have been a great racehorse, but because there's no allowance made for his individuality, is turned into a rogue. Jago escapes into the Australian bush, where he learns to survive. It's not an easy process. 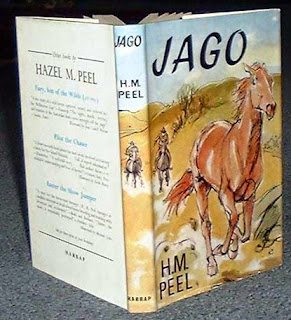 I read other pony books set in Australia at the same time: and loved Elyne Mitchell's Brumby books. They're told by the horses themselves, and although there are occasional intrusions of stern reality when horses die, the horses themselves are noble characters. They look after their mares, don't fight the other stallions too often (and only if they're aggressive first) and are generally all round good eggs. That said, I adored these books and read and re-read them. The triumph of good as portrayed by Elyne Mitchell is enormously attractive. 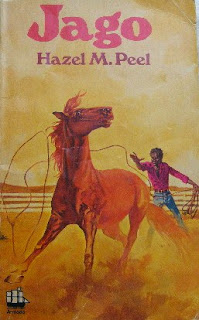 There's not a lot that's attractive about Jago's early existence in the bush. It is both nasty and brutish, but there is a savage glory in the freedom that Jago finally achieves. I think that part of me always knew that horses weren't like Mitchell's heroic brumbies, and that H M Peel had a rather more realistic view of the situation, but both series celebrates the ability of a horse to live without any intervention from man.

"He is Jago, the supreme. King of the outback."