- November 19, 2014
When I wrote my book Heroines on Horseback, I had to cut a lot out. I had particular difficulties with the 1950s and early 1960s, when there was an explosion in the number of pony books published, and stern decisions had to be made. Some authors were funnelled off into the chapter on famous authors; others to the one on series fiction, and the Pullein-Thompsons to a chapter of their own, but that still left plenty of authors to cover in what became known as the Mop Up Chapter. 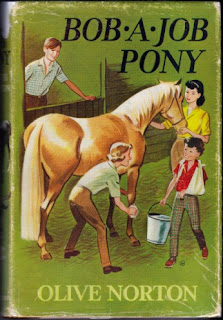 Intitially, it had a cast of thousands, but in the end it was whittled down to M E Atkinson, Hilda Boden, Gillian Baxter, Catherine Harris, Patience McElwee, Sheila Chapman, Kathleen Mackenzie, Lorna Hill, and Veronica Westlake to keep what was already a very long chapter within bounds. Authors only made the cut if they'd made a notable contribution to the genre, whether it was being rather bad (Lorna Hill), or writing well-constructed, involving fiction. Authors of single books failed to make the cut, and so that was the end of Olive Norton.

She wrote Bob-a-Job Pony, which was published by Heinemann in 1961. It’s a story about the attitudes we take, and how it is as well to keep an open mind. Tabby and her sister Anna-Jane are desperate for a pony, but after their father falls ill, that looks pretty unlikely. Their mother has what seem now very dated ideas about earning ones’ living: “We may be short of money, for the time being,” she said. ‘But we don’t have to tell the world. It isn’t done. We must just manage with what we have, that’s all.”

Tabby, however, does not take this attitude: appearances are not there to be kept up, as far as she is concerned. She is an immensely resourceful figure and soon sets about trying to earn some money to buy Peggy, the pony she has fallen in love with. Tabby does have her own prejudices however. She sees June as nothing but a nasty snob, but it's Tabby's mother who sees the real person behind the snobbish nightmare Tabby sees.

The author mostly wrote detective fiction, and the ability to plot necessary to writing a decent detective story stands her in good stead in Bob-a-Job Pony. Sadly the book is not easy to find, but it is well worth tracking down.