Review: Carolyn Henderson - Beside Me

- October 17, 2014
Carolyn Henderson’s Beside Me is based on her Grey Ghost, which she originally wrote for Caroline Akrill at J A Allen. If you’ve read that book, don’t assume you’ve already read Beside Me, because you haven’t. There are a few similarities, but Beside Me is a very different book. I liked the original, but I love this version. It’s subtle, involving, moving: I read it for the second time at our local coffee shop, having forgotten that it made me cry the first time. 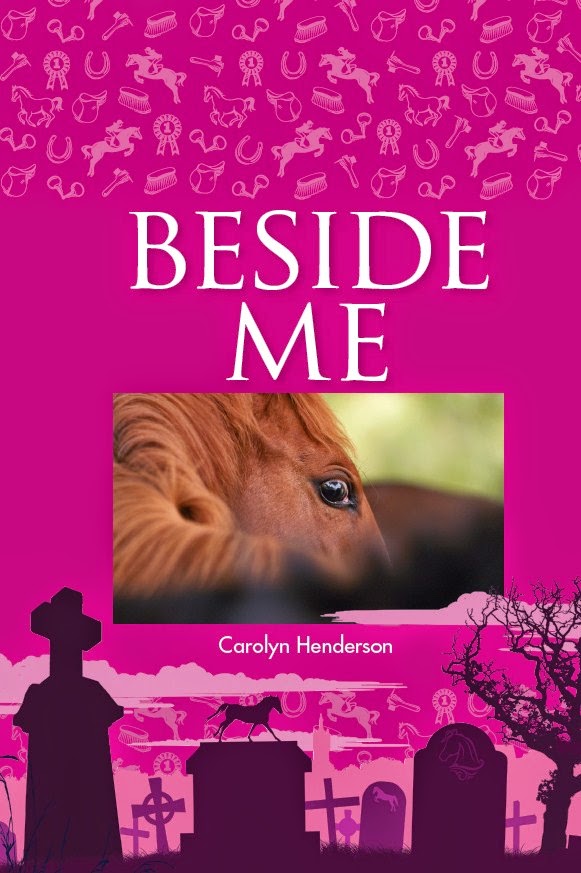 Corinne has a lot to contend with. She doesn’t fit in at school. She’s not, as queen of the school Penny makes clear, one of the cool kids. She is, Penny says, horses obsessed – Corinne says she’d rather look round a tack shop than Top Shop. And Corinne sometimes hears things, and sees things, that really shouldn’t be there. This doesn’t stop her being able to connect with horses: her favourite is Secret, an unbroken pony at the stables Corinne rides at. But the stables are closing, and all the horses and ponies, including Secret, have to be sold. There is no chance at all that Corinne and her careworker mother will be able to buy him, and Corinne’s mother takes a very dim view of Corinne’s ambition to work with horses.

Into all this comes new boy Luca, a Romany gipsy whose father is a horse dealer. Luca is particularly gifted with horses, and that’s what brings him and Corinne together, as Luca helps Corinne break Secret in. Entwined with the pony plot thread is a mystery surrounding Miss Meynell, whom Corinne’s mother cares for. Miss Meynell lives in a ramshackle house with ramshackle empty stables, and when Corinne wanders off to inspect the stables, something happens that has profound effects on all of them.

Beside Me is a richly realised book: we see Corinne at school, and at home, as well as at the stables, so although there’s a strong pony element to the book, we see Corinne as a real teenager, not just a cipher for pony-related events. Carolyn Henderson has a very sure touch with teenagers, and she’s created a thoroughly believable one in Corinne. I don’t like obvious characterisation in books: character x is the bully, so she is BAD, and character y is not the bully, so she is GOOD. It’s much harder to create characters, good and bad, with whom you can sympathise, and understand, even if you don’t particularly like what they are doing. In one of my favourite scenes, Corinne goes to see Penny in hospital, and these two utterly dissimilar girls talk: the real genius of this scene is that there’s not some mushy reconciliation – rather Corinne starts to understand why Penny is as she is.


“I’m starting to realise that we all have ways of protecting ourselves: my way is to keep myself separate and as inconspicuous as possible, but Penny’s is to dress and paint herself into the person she wants to be. Last week, she was the bitch queen. Today, she’s the princess of sorrow.”

I also liked the approach the author takes with Luca. Granted he is the stuff of which dreams were made, but there’s no frantic storms of emotion from Corinne. The author allows her to take the relationship at a slow pace, which is, though they’d probably rather  die rather than admit it, what most 14 year old girls want.

Henderson tackles difficult subjects: an overdose, and the death of a dog, sensitively and realistically. Yes, there’s grief, and pain, and although some minor characters definitely go off the deep end, Corinne and Luca have a much more measured attitude. I liked this heroine, who thinks her way round the things that happen to her. I liked the solid belt of decent instruction on things horse. This book takes over the instructional mantle from Josephine Pullein-Thompson. I can see people reading this book using it if they ever have a pony to break in.

The book combines solid equine fact with some brilliantly realised characters, and Carolyn Henderson tells a good story. The supernatural element isn’t overdone, and I was completely convinced by it.

My one minor quibble lies with the publisher. Forelock are still prey to typographical errors here and there: fortunately not quite as many as their earlier books, but they’re still there.

But Beside Me is one of my books of the year.