- October 11, 2014
The best pony book authors create characters who convince you no matter what end of the social spectrum they're from. Many of Gillian Baxter's heroines, like Bobby in the Bracken Stables books, and Frandia in Horses and Heather are monied. In contrast, there are those who approach the horse world from the opposite end of the income scale. Lindy Smith, the gipsies’ daughter of Horses and Heather, has to some extent taken on the behavioural models of her parents when she decides to keep the filly she finds wandering on the moors, though she knows she must belong to someone. 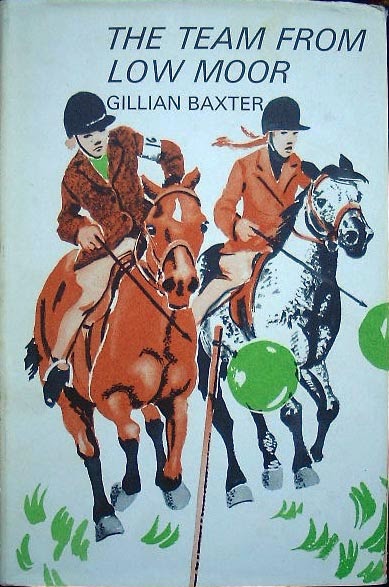 Furiously ambitious but poor Edie, whose only hope of succeeding with horses is to work with them, causes an accident in the pursuit of her ambition in The Team from Low Moor (1965). Edie isn't actually the heroine of The Team from Low Moor - that's Charity Whitford. She runs the Pony Club. The Low Moor branch is the poor relation of a much wealthier branch, with an array of ponies only a mother could love, but riders who are keen. When Charity meets Laurence Croft, a famous show jumper who was blinded in an accident which also killed his family (and which was his fault) she manages to persuade him to take the club on and train them. So successful is he that they compete at the Prince Philip Cup.

Charity is an oddity - she is, to me, one of Gillian Baxter's less successful characters. She's strangely indistinct, I suspect because the far spikier and more interesting Pony Club member Edie grabs all the narrative interest herself.