- October 07, 2014
Monica Edwards' Under the Rose (1968) is quite unlike her Punchbowl and Romney Marsh series: there's no gentle Cascade here: the horse in this story is far worse than Lindsay's colt Chalice with his nipping. This horse can kill, and one of the children in the book has a particularly terrifying experience before the horse relents in its pursuit. 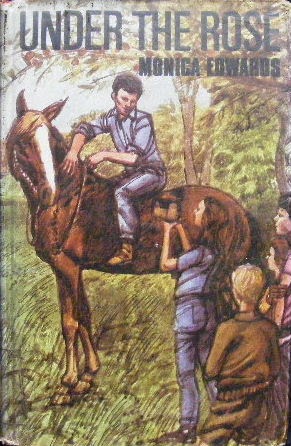 The horse is part of the mysterious world of the shut-up country house, Kings Somborne, that enchants the Black and Hunter children. It's there that the horse, and his groom end up. Their lives are in turmoil, but so are the children’s. The Blakes’ desire is not getting a pony, but finding somewhere to live, now that their father has announced he wants the family house for himself and his new partner. The Hunter children have parents who live together, but whose mother is so obsessed with doing good works that she rarely sees them Theirs is a different world from the comfortable, stable families of the Punchbowl and Romney Marsh books, and the horse in it reflects that.