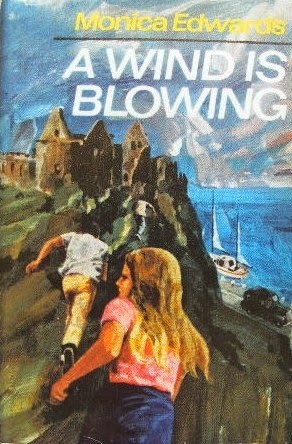 Although ponies become a less important element in Tamzin’s life as she gets older, the part an animal can play when human comfort will not do comes touchingly into play in the last of the Romney Marsh books,  A Wind is Blowing (1969).  Tamzin, overwhelmed by grief when Meryon rejects her after he is blinded trying to stop a bank robbery, seeks refuge with Cascade. It is a wonderful picture and completely unsentimental; Cascade’s real interest, I am sure is in his hay, but nevertheless his presence does what is required, and Tamzin is comforted.

Crying  bitterly and desolately for a long time it seemed as if grief and hopelessness began to go out of her with the tears, until there was only a clear calm like the sea after storm. She had been drifting in that storm, but now her boat was answering to the helm again,
and there was  a star to steer by.

With a wisp of hay in his teeth Cascade turned to look at her as she leaned against him to re-read her letter.”

Cascade saves the day later when ridden at breakneck speed from Castle Farm to get Meg the collie for Meryon before she can be taken away by the town couple who have offered to have her.

A Wind is Blowing is one of those books that divides Monica Edwards' readers. Not everyone likes the Meryon who emerges in this book, with his arrogant refusal to listen to anyone, and his almost rejection of Tamzin. To me, it's believable. Meryon has always been the golden boy; always been able to think his way out of his troubles, but you can't think your way out of being blind. And people often hit out when hurt and frightened, particularly when they are unable to admit it.

I find this book a fitting end to the series: having overcome this huge test of their relationship, the reader can be fairly sure that Tamzin and Meryon are fairly launched on adulthood. I do wonder if Tamzin did ever become the long-faced, horsey woman she so feared becoming, but somehow I don't think she did.