June M Groves wrote pieces for equine magazines, but as far as I'm aware, just the one book. This 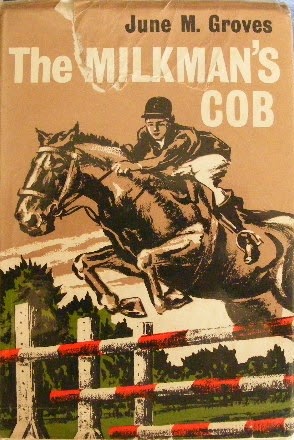 was The Milkman's Cob (1961). The heroine loses her jumping pony Larke so stops riding, until the local Dairy converts to modern vans and 'Happy' the Milkman’s cob is to be sold. It is a lovely story of his transformation from pulling a float to winning at the Horse of the Year Show in the junior jumping. It’s told in the first person, by four different narrators, which at first I thought would prove irritating, but June Groves does get enough differentiation into her characters to make this work.

Unlike many pony stories where the most pedestrian pony clears 3’ 6” with ease, Happy’s clearance of a 5’ 3” hedge is completely convincing, particularly as this so shatters his rider that she has to be slowly and gently persuaded back into jumping anything again, let alone a fence over 5 feet. The illustrations don’t do the book the favours which perhaps they might, but if you can manage to get hold of this book it is well worth the read.

June used to live in Berkhamsted with a horse living in the back garden in a large converted shed - a cob called Mr Happy, the horse on which the book was based. Like her heroine, June was a keen show jumper. Show jumping wasn’t the only thing she did: Jacquie, June’s niece told me June was “on friendly terms with the late Dorian Williams and used to get involved in pageants for him - where both she and Mr Happy used to dress up for the day. She maintained that Mr Happy loved it - but I'd have rather heard it from HIS mouth..........”