- October 29, 2014
I have an uneasy feeling I might have already covered this book once, but I do not care. It's one of my favourite pony books, let alone one of my favourite JPTs. And it has one of my favourite covers. I have no idea who did the beautiful illustration for the 1970s Armada edition (pictured below), and I wish I did, because I'd love to tell them how very much loved that cover is: and not just by me.

Prince Among Ponies (1952) features someone who popped up frequently in her books: the person who will not listen. Six Ponies was dripping with them, with Evelyn Radcliffe being possibly one of the worst. In Prince Among Ponies, it's bolshy Jane who takes this role. Hero and heroine of the book Patrick and Sara have gone to stay for the summer with Jane’s family, the Merrimans. Patrick and Sara live in suburban London, where they have learned to ride with an instructor who has Pullein-Thompson approved attitudes to equitation. 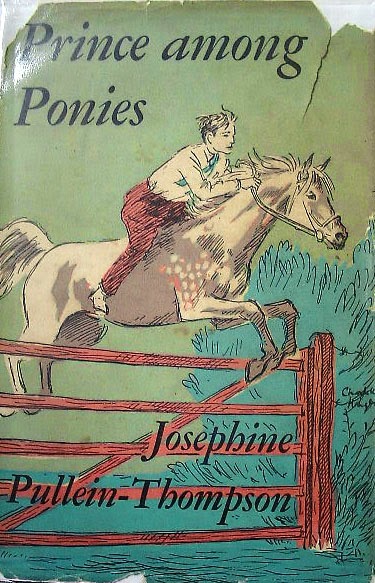 The Merriman family have horses, but have learned to ride in a much less formal school: they stick on and kick. Youngest daughter Jane is the kickiest of them all. Her beautiful grey pony, Adonis, has taken grave exception to this approach, and no one is now allowed to ride him as he is considered unsafe. Patrick and Sara ride him in secret, and armed with the theories of their teacher, Captain Stefinski, succeed in persuading Adonis to behave. Once their secret has been discovered, Jane refuses to believe that they have had any real effect on the horse. Once he is fit, she says, he will run away with them. Her father disagrees.


“Nevertheless,” said Mr Merriman, laying down his paper and helping himself to marmalade, “they have quite a different effect from you, on Adonis. One wouldn’t think that he was the same pony. And it isn’t” he went on firmly, ignoring Jane’s attempt to interrupt, “anything to do with him being lazy – he seems just as fresh as ever. But he looks like the pony we bought. You remember how much we all admired him when we saw him ridden by those Dawson girls?”
“They’d probably doped him,” said Jane. 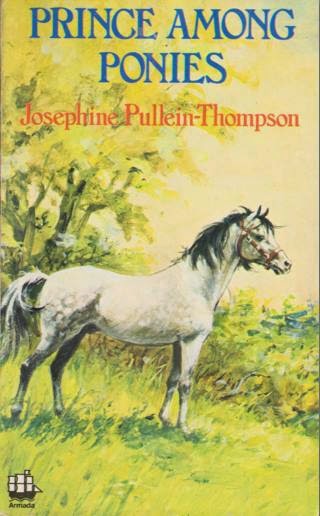 I do love the humour of this book: Jane's snarky snarling, and the slapstick comedy of the mushrooms which get squashed to smithereens when Adonis dumps his rider on top of them. Prince Among Ponies is still a great read, and if you want to read just one JPT, this is probably the best place to start.