- October 30, 2014
Today's book is a real life story. It's written and illustrated by Paul Brown, probably the most sought after equine illustrator in America. Paul Brown started his career as a commercial illustrator, a career interrupted when he left America to serve with the First Light Infantry Division in World War I. He missed death by inches when a grenade shot past him just as he turned his head. When he returned to America, he picked up the reins of his business again, and carried on doing commercial illustration. 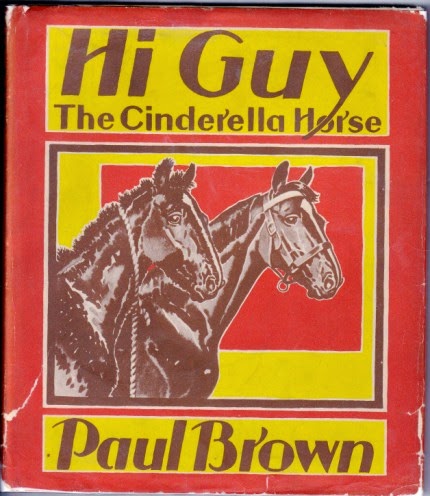 He wrote and illustrated several children's stories, one of which is Hi Guy, the Cinderella Horse (1944). The horse, Robin, was rescued from a pound after his owner abandoned the horse when he moved away, and left the horse to starve. Just before he was about to be destroyed, the horse was bought by a riding academy owner for $5. The horse, renamed Hi Guy, more than repaid the $5 purchase price. Once fit, he went from strength to strength, showing an unexpected talent for jumping. He competed, and won, at Madison Square Gardens.