- October 08, 2014
It is one of those things that really dates you - can you remember the glory days of show jumping on television, when after the news finished (about 9.30 pm in those days) you'd get a full week of show jumping from HOYS? I remember the joy of being allowed to stay up to watch it (I had a mother who was keen on early bed times).

Dorian Williams (1914-1985) was the voice of show jumping on television. He commentated in the glory days of horses on television, when every evening programme of the Horse of the Year Show and the Royal International Horse Show was televised. Educated at Harrow, he had a full life: besides commentating; he was involved with the British Horse Society as a member of its council, and Chairman; and was instrumental in setting up the National Equestrian Centre at Stoneleigh. He was also Master of the Whaddon Chase Hunt. He used his family home, Pendley, for a Shakespeare Festival, and set up a Centre of Adult Education there. 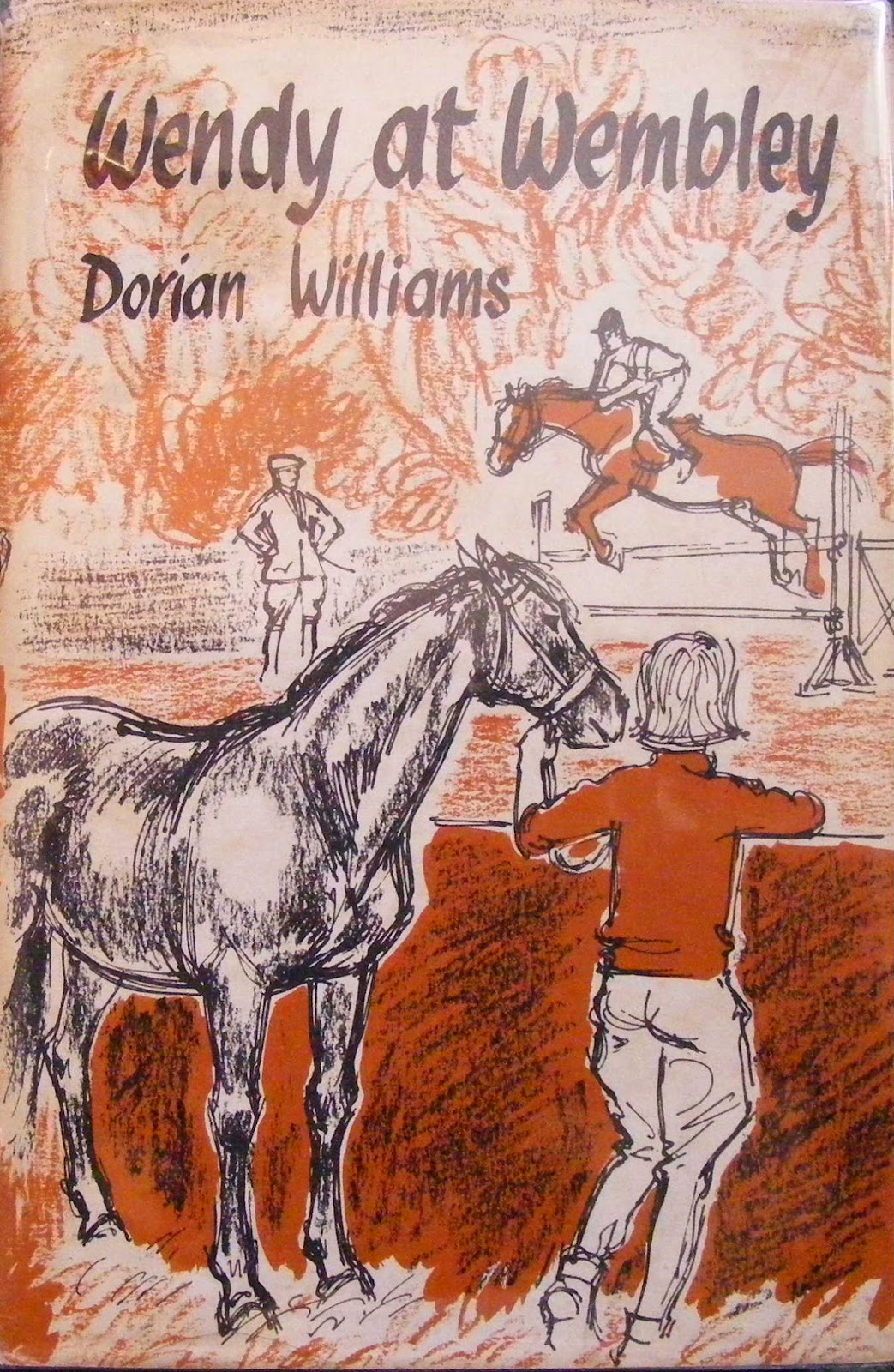 As well as all this, he found time to write. The Wendy series explores what life was like for a working class girl working with horses. Wendy is soon whisked away from her ordinary background (Dorian Williams, with what jars as a spectacular bit of sexism now, describes Wendy’s mother as “just a busy housewife looking after six children.”) In the first book of the series, Wendy Wins a Pony (1961), Wendy does indeed win a pony in an art competition, but the pony himself, Smiley, plays remarkably little part in the story. He is simply a device to get Wendy away from her family and in to work. After Wendy has nowhere to keep her pony her guardian angel, Miss Rogerson of the local riding school, advertises on Wendy’s behalf for somewhere to take her as a girl groom, with attending pony. Wendy finds work with the Tivertons, and their new residential riding school, and that is where the three-book series is based.

The series is a reasonably realistic portrait of what life as a girl groom would be like, with unrelenting long hours, exhaustion and not much in the way of time off. If you want to know exactly what the working life of a girl groom will involve, you'll find out from this series. This concentration on the minutiae of working life means that darker depths to the characters, are hinted at, but aren't explored. Mr Tiverton doesn't have much of a grip on financial probity. They've used Mrs Tiverton's legacy to start the stables, and sold their cars and their best horses. Mr Tiverton seems oblivious to the choppy financial waters in which they are sailing:

...”God knows how we’re going to pay for it.”
But he did not sound serious; in fact he laughed cheerfully and winked at his wife, as though there were some understanding between them. She smiled back, then frowned almost imperceptibly...”

These hints that all is not well remain just hints, and the tension between the two Tivertons is never properly developed.

What can go wrong when working away from home is made a little more explicit. All is not plain sailing between Wendy and her employers. In Wendy Wins Her Spurs (1962), Wendy leaves, and gets a job with the Whittle family. It is difficult to see Mr Whittle as anything other than an older man who wants to get Wendy into bed, although this is never openly stated. He is constantly trying to get her alone, is obviously resentful when her friend visits and shares her room, and at one point comes into her room after she's gone to bed. Nothing happens, but it is difficult not to wonder where Dorian Williams was going with that particular plot line. In the end, Mr Whittle, tries to dope a racehorse and is arrested, saving Wendy, the reader is convinced, from a much worse fate.

Was Dorian Williams trying to warn young girls working with horses of what could go wrong? Perhaps he did not feel able to write directly about the threat from a male employer. (Susan Chitty’s 1966 A Life with Horses has her heroine being chased round the feedbins by one of her employers, but this is treated as a joke.) Working life is not straightforward in Dorian Williams’ books. Even the seemingly decent Tivertons conspire with one of their pupils behind Wendy’s back, when he rides her horse at the White City Show. Although Wendy does perhaps over-react to the discovery that Roger Lovell has been riding her horse when she isn’t there, it was not a particularly honourable way for employers to behave.

The series as a whole is still a readable one. Wendy is a young and rather naive girl, living away from home for the first time, and her life with horses seems realistic. She has no major triumphs in the show ring: her horse wins at the White City show, but only when he is ridden by someone else. When Wendy goes to Wembley (Wendy at Wembley, 1963) she does not compete, but takes part in a pageant. Any girl reading the series would come away with no illusions about the sheer slog involved in a career with horses, and perhaps an idea of some of the downfalls.

This piece has been adapted from my book, Heroines on Horseback