- October 14, 2014
I've reached the end of the HOYS section, so am doing a swift detour back because I didn't include Monica Edwards' Killer Dog in my round up of her books. Granted, it isn't particularly horsey, but then neither are quite a few of her other titles, and I've included them. This one I just plain forgot. 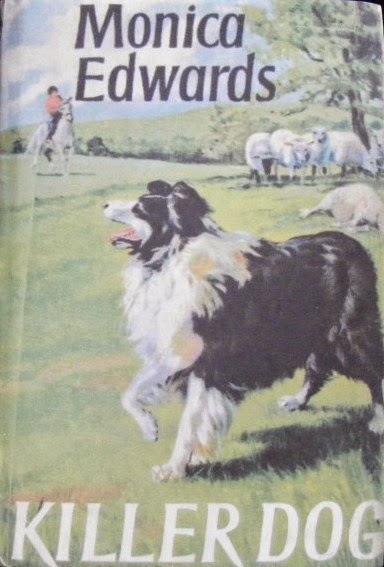 Killer Dog is a novelisation of the film The Dawn Killer. I thought the book had first seen the light of day as a script written by Monica, but I'm not sure whether or not this is the case. The book is set on Romney Marsh, and that's where the film was shot too. The book isn't, however, a Tamzin story.

The heroes in this one are the Hawkes family. Sheep are being killed by a dog, and suspicion falls on two dogs: the Hawkes Glen, and another dog, Lion. The Hawkes are determined to prove Glen is
innocent, and wait out on the Marsh to try and discover which dog is the attacker.
Sadly this book is based in fact. Before we moved a couple of years ago, the field neighbouring ours was let out to a farmer who grazed his sheep there. He moved the sheep after an horrific dog attack, which left sheep so badly wounded they had to be put down. Farmers can still shoot dogs if they believe it is the only way to stop them worrying stock.