PBOTD 25th October: Pat Leitch - To Save a Pony

- October 25, 2014
I can't believe that I haven't already covered this book, but I haven't. It's Patricia Leitch's first book, To Save a Pony (1960), published under the name Pat Leitch in 1960. The Dallas family re-locate to Scotland and start a riding school in order to keep the wolf from the door. The family, including youngest child Jane, go to a local horse sale to find ponies, and Jane sees a pony she is desperate to save.

The conventional pony story would at this point either have Jane spending her little all on the pony (because she conveniently has savings, probably augmented by what she can beg from her siblings) or frantically coming up with some money making scheme in order to make the money to buy the pony. This scheme is, ultimately, successful. Jane tries to take the route of raising money, but it doesn't go according to the pony book plan. 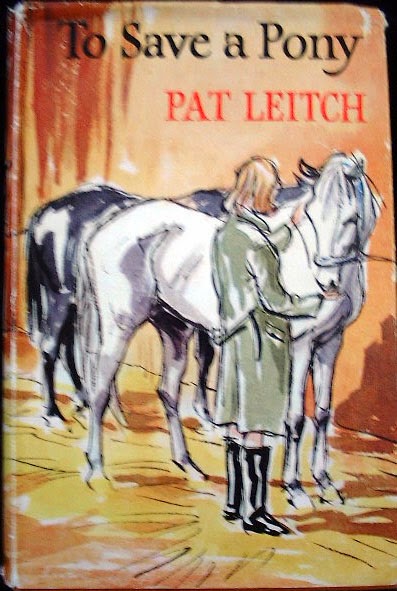 No miraculous means to buy the pony appear, and Jane has to wait until the end of the book before she sees the pony again, when she discovers her condemned to the dreadful pony book fate of pulling a cart. But Jane is writing a pony book, and she is sure that if she can only get the manuscript to a publisher, it will provide her with enough money to buy the pony. (This had worked for other pony book heroines; Josephine Pullein-Thompson’s Christabel in I Had Two Ponies for one). Gregory, who runs the riding school and has lived with the family since he was five, challenges Jane.

“And where will you get twenty pounds from? No, don’t tell me. I can guess. Your book!”
‘Well, why not?’ I demanded.
‘Jane! Jane! Jane! Will you never grow up? Things like that just don’t happen. You’ve got to face up to it that life is brutal and hard and not a fairy tale with you as the principal fairy godmother.”

She does, in the end, get the money, but only by conquering her fear and doing what she has flatly refused to do before: jump a pony in a show. An author refusing to allow the pony book heroine to be “the principal fairy godmother” was almost heretical at the time: pony book after pony book saw miserable ponies rescued by the strenuous efforts of the heroine. In Patricia Leitch’s world, which was a more realistic one than most, girls do not necessarily get ponies.