- October 20, 2014
There were a few books I acquired as first editions, and Christine Pullein-Thompson's Riders on the March (1970) was one of them. Of the Pullein-Thompsons, it was Christine who worked hardest at being relevant. Even in the 1950s, decade of the middle class pony owning child, Christine used working class characters. The First Rosette (1956) had as its hero David Smith, the youngest son of a family where money really is an issue: David’s family genuinely struggle, and there is no money for riding lessons, let alone ponies.

David's struggle is contrasted with the far more conventional pony life of Pat, the daughter of the Master. After David catches Pat's pony when she falls off, he is invited to tea and offered the chance to borrow a pony. Christine carried on introducing working class characters, with Janice and Mick in The Lost Pony (1959). All these characters, and the comprehensive school pupils in Riders on the March, are all prone to the same mercurial swoops from happiness to gloom. It is as though Christine’s desire to sympathise with the difficulties of being poor leads her to over-write their emotions. Without any direct experience herself, she seems to assume there must be a heightened emotional response to life generated from being brought up in difficult circumstances. 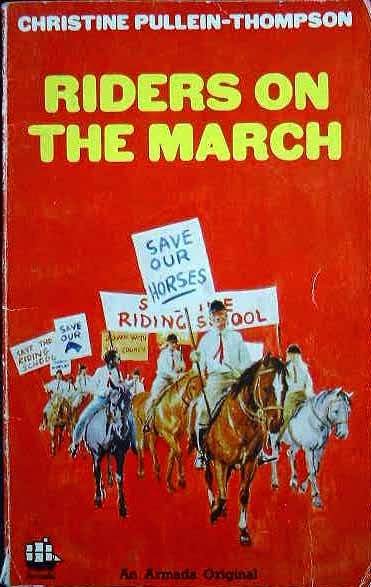 I loved Riders on the March at the time because it dealt with characters who didn't have ponies, which was my lot, but I must admit I've found it hard to keep feeling the love over the decades. I do find the characters' emotions hard to keep on top of.