- October 23, 2014
I am slightly handicapped attempting to write about Christine Dickenson's Dark Horse (1973) because firstly the lovely piece I'd semi-written in my head has actually used the plot of a totally different book, and when I went to find my copy of Dark Horse to check the details I found I do not actually have a copy. Ah. 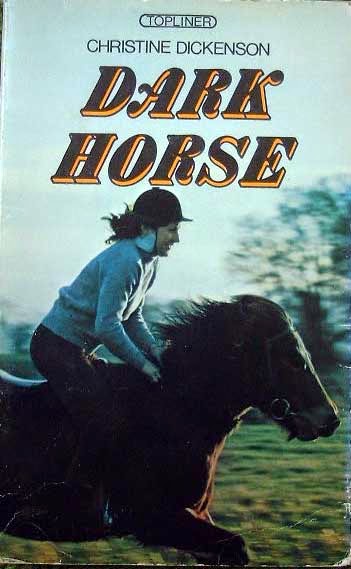 But should I buy one? I am, although my family might not believe it, trying to cut down on the number of books I buy. When I compare the number coming in with previous years I'm not actually doing too badly, though I have blown the budget somewhat by buying a whole load of PONY and Riding magazines from the early 1960s, and now I come to think of it I do very, very much want to acquire the PONY mags I don't have from the 1940s and 1950s which is in fact all of them. I might just pop over to eBay to see if there's any there. Because you never know. And magazines don't count as books. And they are useful for research, because I'm sure everyone else wants to know of obscure pony books now vanished into obscurity just as much as me.

I will see you later. EBay calls. And it isn't as if I'm going to buy a book.