- October 17, 2014
D A Young's Ponies in Secret (1955) is another book about a riding club, but it's also about what happens when power goes to people's heads. When the book opens our heroes are hugely excited by the prospect of a summer filled with ponies. They're even more excited when they learn there's a local riding club, but then they meet the people who run it, who are not actually much older than them, but have rigid ideas on what's what. The book is a well observed story of the wielding of power, and of how easy it is to misinterpret what people do. 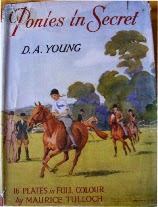 Ponies in Secret is illustrated by Maurice Tulloch. I often burble on about how the classic pony book seems to exist in a sun-drenched eternal summer. The sky is blue, the grass is green, and the ponies all smart and glossy. Maurice Tulloch captures this vision in his pony book illustration. I do wonder if it made a difference from his hunting illustration, hunting necessarily being often rather bleak, as much of it takes place in the winter.

I think Ponies in Secret is the most sun-drenched of all the pony books he illustrated, and if I had to pick an illustration which sums up the pony book world of the 1950s, I think the one below would be it. 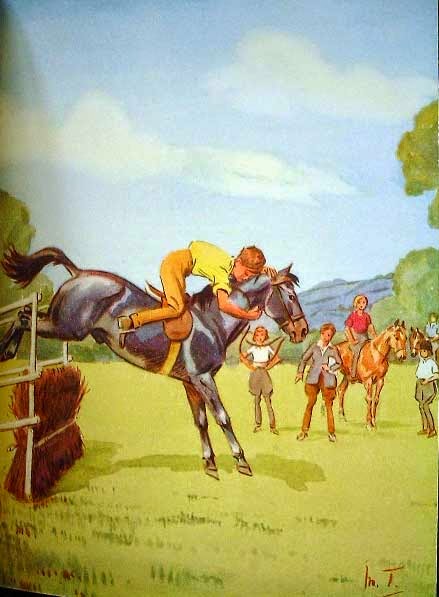 More on D A Young (not much. Sorry.)
More on Maurice Tulloch