- October 12, 2014
If you've never read Dream of Fair Horses, you are in for a treat. It's certainly one of Patricia Leitch's best books, if not the best. When you read it, you can see where Jinny came from, but it's not necessary to have read the Jinny books to appreciate what Patricia Leitch does with the pony book here. What I actually want to do in this piece is quote reams and reams from the book, but I will restrict myself, because really all those quotations sit better when welded in to the rest of the book. 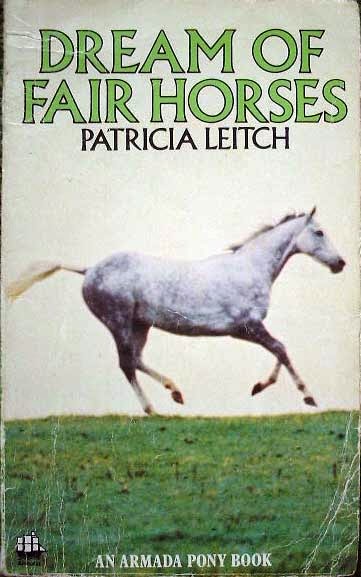 Gill Caridia is one of a family of seven, whose author father, Laurence Caridia writes novels of the sort that critics love but nobody buys. His detective novel, however, has sold so well he's been able to buy back the family home, Hallows Noon. Up until this point, the Caridias have led a nomadic life, moving from place to place as their always-precarious fortunes fluctuate, but this time the family hope they have settled. All sorts of visions of normal life lie before them, but underlying it all is Laurence Caridia's growing belief that he has sold his soul.

Hallows Noon, ironically, means Gill, the only horse lover of the family, gets to experience what her soul longs most for. Across a like is a field of horses and a beautiful grey pony, Perdita. The pony's owner, Mr Ramsay asks Gill to ride the pony, Perdita. It is a magical experience.

“Perdita changed from a trot, her hoofs pounding the ground. Suddenly she broke out of the circle and flung herself madly away from the rein. She snaked her head, her tangled mane tossing and wild and then she reared up, touched down and reared again proud and defiant. For a second she balanced there. It was as if a tree had sprung from the ground surging in the instant from a seed to a full blossomed tree, blazing and brilliant. As if for a second I could hear the rage of the sun.

I caught my breath and heard Mr Ramsay laughing with a deep gravel sound. A flow, a current, strong as an electric shock passed between the three of us.”


Gill loves Perdita with every fibre of her being. To Gill, because she loves her, the pony is hers. And when Mr Ramsay dies, he leaves the pony to Gill, not to his family. But by this time, financial disaster has closed in again upon the Caridias. Their house has had to be sold to pay their debts; and they are on the move again, probably to inner-city Birmingham. There will be no fields, no stable, and no money: no way to keep Perdita. Laurence Caridia is returning to what feeds his soul. Gill thrashes round frantically trying to find a way to keep Perdita, but her father points out with a relentless lack of sympathy just how hopeless the case is.

“..”You can’t keep her the way she should be kept. Can’t afford to feed her. But you don’t care, that doesn’t matter; as long as you can possess her you don’t care what happens to her.”
“But I love her.”
“Love! You call what you want to do to Perdita love? You only want to hold on to her, never let her go. She’s bred for the show ring... Do you think she’d be happy shivering in a field while you deliver your papers... “

Gill lets Perdita go. By the end of the book she has met a boy, and plans to live in a commune with him ”to build a new way of living together, or sharing love.” I suspect she gets on better in the life that was to come than does her father, whose books I would have been interested to read. It would be intriguing to see just what his mixture of honesty and selfishness would have produced. Jewell said…
I hoped you'd feature this one! It's absolutely wonderful, even better than the best of the Jinny novels. Hard to think of a better pony book really.

I love how well-realised all of the other characters are, from Mela (I think...) Troughton to the Ramsays to Gill's brothers and sisters.

I longed for one of my parents to burst into school, quote Blake at the teachers, and bust me right out, Caridia style.

Jane Badger said…
It is a fine, fine book, and yes, wouldn't it have been fine to have been busted out by Blake-quoting parents? Mine would have been far more likely to have marched me back in, demanding Blake be memorised.
27 October 2014 at 14:16