- August 05, 2014
Today's PBOTD continues the falling off theme. The pony looks blissfully unbothered by its rider's unscheduled exit. The rider seems far more interested in the three girls peering over the wall at her than in going and collecting her pony: I am tutting and I am sure the Pony Club is tutting with me. 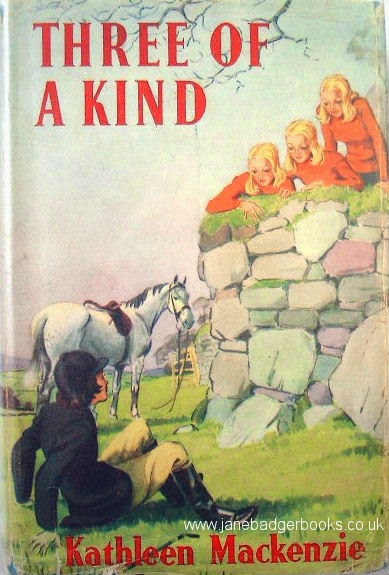 Kathleen Mackenzie was one of those writers you feel only included ponies because they sold books. Her stories are far more family than pony orientated. Three of a Kind, which was published by Evans in 1956, features Margaret Comyn and the triplets Ginny, Janey and Jenny. Margaret's mother wants the very best horses to show, but Margaret's too nervous to ride them, and so the triplets prove a godsend, as Jenny is an excellent rider. The story is far more about the machinations of getting Jenny to ride the horse: Jenny has to ride and train the horse, Sir Peregrine, while Ginny has been given a part in a play. Ginny persuades Janey to take her place at an audition when she can’t go, and Janey takes Jenny’s place riding Sir Peregrine to win at the Southern Counties Show. Complicated stuff.

Christina Wilsdon said…
made more complicated by the very names Ginny, Janey, and Jenny! What parents would inflict such confusion on themselves? Yikes!
5 August 2014 at 16:18