- August 19, 2014
Don't be fooled by the illustration of Highland Pony Trek, which promises a conventional equine holiday adventure. In Patricia Leitch's Highland Pony Trek (1964), Scotland is a Scotland that is threatened – heroine Innes and her family are hanging on to what they love under threat from the nouveau riches who see Scotland simply as a playground. 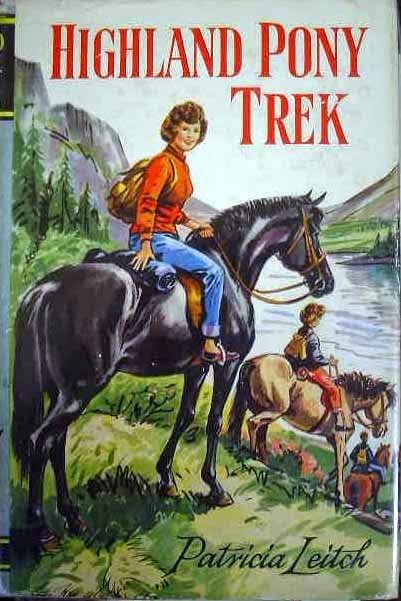 The characters in Highland Pony Trek aren't the convention sort who believe that if they work hard everything will work out. There's much more failure than is usual in a pony story. Elder sister Fiona is inclined to give up, and gets bored with the whole trekking idea half way through.

You can see in this book the germination of the themes Patricia Leitch was to explore at length in the Jinny series: the danger of having too much money, which insulates you from the natural world, and the real difficulty of making your way in a world which view you at best dispassionately.

Helen said…
Is that the one where they are in a terrible heatwave? If so, I remember reading it as a child and being surprised that Scotland even had heat waves!
My favourite pony book, Joanna Cannan's Gaze at the Moon, was also very much about the protagonist struggling with class and poverty against the effete rich.
20 August 2014 at 00:44