- August 23, 2014
Josephine Pullein-Thompson's Woodbury Pony Club series is one that gets better as it goes on. Pony Club Trek (1985) is the last in the series, and the one in which we get to see the Pony Club as real people and not just as objects of all the instruction. The characters in this trilogy are unusual in that no one is particularly redeemed - they carry on being themselves, just riding a bit better and perhaps understanding each other better, all of which is perfectly believable. 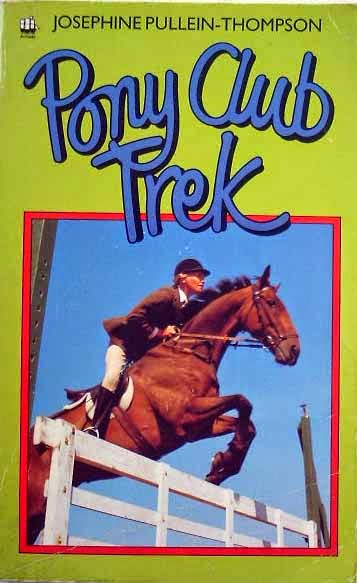 The series takes place over a short time frame, with Pony Club Cup taking place in the Easter summer holidays, and Pony Club Trek in the summer holidays. It's not particularly realistic to expect that there will be major changes in character and behaviour in that short a time, and there aren't. I must admit that I did long, when I read the book, for the ghastly Sarah and her even more ghastly mother, Mrs Rooke to well and truly get their come uppance, but they don't: Sarah does though become the victim of her character flaws, not improving at all as she refuses to listen to anyone's opinion but her own.

I do know that Josephine Pullein-Thompson did base many of her characters on real people. The hideous Pony Club mother that is Mrs Rooke has many equivalents in real life, so I hope that the fictional Mrs Rooke is a composite and has no real life equivalent, and that Sarah doesn't either. She must have become a monster.

In a book full of richly drawn characters, it's odd that there's no Major Holbrooke equivalent. He was an irascible, confident and knowledgeable voice throughout the Noel and Henry series, who we saw as a person with a life outside the Pony Club. We know as little about David the instructor at the end as we do at the beginning.

If you haven't read the Woodbury series, I can highly recommend it. The books were published in paperback, and then in a collected edition in hardback, and all are easy to find.

Anonymous said…
We had "Mrs Rook" all be it a slightly lower class version, in my Pony Club. She was an officer with two children, the older child always had the cheaper, grottier pony, the older child being spoiled and always having the more expensive, better schooled animal. However none of them were quite as bad as the Rooks and didn't turn out to be totally spoiled.
I wish there had been a longer series of books, where Lesley was allowed to develop her confidence and Sarah and Mrs Rook met their come uppance. Mr Rook, the solicitor is mentioned, but never appears in the books.
24 August 2014 at 11:58

Jane Badger said…
It's always far more satisfying when the baddies get their comeuppance, but I suppose rather more like life when they don't!
26 August 2014 at 11:11