- August 13, 2014
Sea Ponies is one of my favourite holiday adventures. Besides allowing children independence, holidays can act as vehicles of change. It's a truism in pony books that the countryside is liberating, and one of the earliest exponents of this point of view was Marjorie Mary Oliver. Her loosely connected The Ponies of Bunts (1933), Sea Ponies (1935) and Ponies and Caravans (1941) all have more or less the same plot: children who are constrained in some way experience the liberating experience of the countryside through a woman determined to defy convention and live a life surrounded by a collection of children and animals (though mostly ponies), children and ponies alike being managed with casual authority. 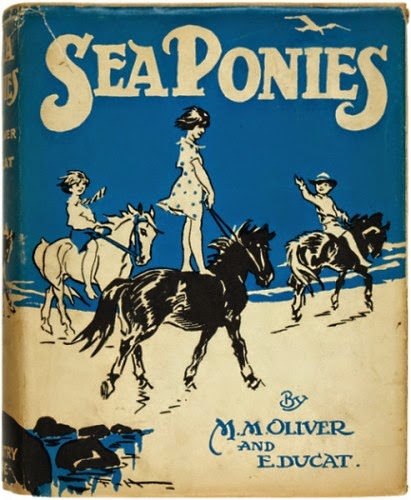 Roger, hero of Sea Ponies, is one of the most pathetic of the townie children. Sent to England and his aunt for his health, away from his parents and India, he is muffled up even in the heat of summer. Hideously fussy Aunt Matilda thinks pips in jam are dangerous, and seizes every chance to forbid indulgence in the lethal substance, and in anything else that might be even remotely fun.

The repressed nature of Roger’s existence is contrasted with the utter lack of care for what anyone may think that is expressed by Chris, one of the children who lives in freedom with Miss Rhoda and her collection of animals, and who eventually takes Roger on and sets him free. Waiting with some of the other children and ponies to meet a train, she stands casually on the back of her pony. She so inspires Roger with her insouciance that he throws his hated muffler and hat onto the station roof. Poor subdued Roger is convinced Chris and her friends must despise him. As he trails along after Aunt Matilda, he turns and looks back at the children.

“Chris was again standing like a circus rider on Tag, and as he turned she raised her hand and waved to him, and then Bunch and Geoffrey waved too. Roger dropped behind Aunt Matilda and waved back with all his might.” 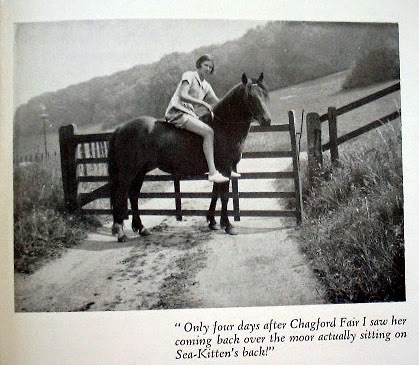 I love this picture of a child suddenly transfigured, even though in Sea Ponies, as in the other books, nothing much happens to challenge the happy endings. Everything ends in a glorious sunlit world where everything has worked out (and everyone lives in the country).