Sheena Wilkinson's first pony story, Taking Flight is the story of two cousins; spoiled princess Vicky and out of control Declan. At the end of Taking Flight, Declan has discovered his love for horses, and despite his best attempts to ruin things for himself, has the offer of a job with the owner of the livery stables where Vicky's show jumper Flight is stabled. It looks as if everything is set fair for pony book success - Declan the show jumper; Declan the eventer.... an inspiring story of a tough working class boy made good.

And so it is as the sequel, Grounded, opens. Declan is jumping Flight at the biggest show he's ever taken part in. They win. Declan sees the owner of a big stable approaching him: for a moment he thinks he's to be offered a job, but no. Vicky has sold Flight to him. That's the first blow. But Declan manages to find a new job in a German jumping stable: it will mean starting at the bottom, but it's a foot in the door. And then the major blow falls: Declan's girlfriend Seaneen is pregnant.

At once, Declan's world is rocked to its core. At least his mother, now sober, is still around, but Declan, not out of his teens himself, has to make some important decisions, very fast indeed. Declan is not used to asking for help: it's something he's extraordinarily bad at, and something which alienates him from those who love him and want to help. Although he decides to stay with Seaneen, his heart is by no means in it, and his problems have only just begun. 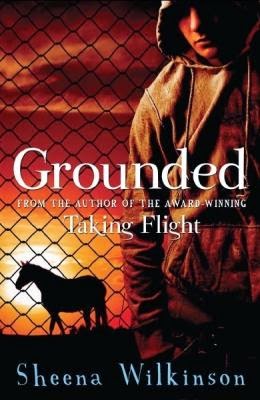 More on Sheena Wilkinson
More on the Dublin Show