- August 27, 2014
Kelly McKain is one of the modern breed of pony book author. Pony books aren't the only string to her bow, by any means. She's written several other children's series: including Fairy House, Totally Lucy, Mermaid Rock and the Goddess books.

Over 2006-2012 she wrote the twelve book Pony Camp Diaries series. There haven't been any pony book series since: whether because the author prefers writing other things, or sales didn't hold up of Pony Camp Diaries I do not know. 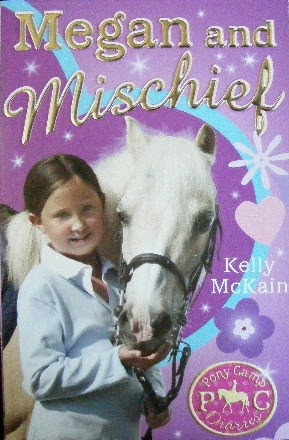 The Pony Camp Diaries series is one of those things that is not necessarily going to appeal to adults. It's positively peppered with exclamation marks, and every book is written in that relentlessly jolly style that many children's programmes of today adopt. When my daughter and I read it, she didn't mind the style at all but it nearly drove me demented. I was reduced to picking pages at random and counting the exclamation marks just to see if they were as common right the way through the book. (Yes).

The books, however, deal with one of those things that all those who love ponies but don't have one see as the absolutely ideal holiday: a stay at a riding centre where you get to look after and ride the same pony for a week. It's as close as many of us come to actually having one of our own.