- August 16, 2014
Margaret MacPherson set Ponies for Hire, and her other two children's books, on the Isle of Skye, where she lived. The book has an authentic background: crofting has never been an easy lifestyle, and Kirsty and her family are struggling to survive. Her brother, Robbie has had enough of farming using Highland pony horsepower, and wants a tractor. If he can’t farm in an easier way, he’ll go off to sea. Kirsty of course is desperate for this not to happen. Her widowed mother starts to take in holiday makers to make enough money to pay for the tractor, and Kirsty, together with their first guest, Nick, start a small trekking operation with the rest of the community’s ponies, fortunately on their summer break from farming. 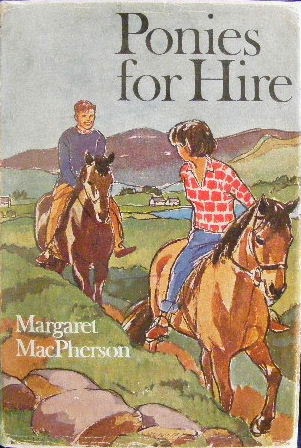 This is a book it took me decades to read, despite the fact I encountered it more than once. It was published as part of Collins Three Great Pony Stories, and I never got any further than the middle story, Monica Edwards' The Midnight Horse. I loved The Midnight Horse with a passion. I was absolutely fascinated by Tamzin and her ability (which sadly deserts her after this book) to construct horses out of Plasticene. I, in common, with every other child educated in the 1960s and 1970s, was an old hand with Plasticene, which used to come in huge blocks at school, but try as I might I could never make anything like Tamzin's creations. And so I lived through her, imagining that my fingers would actually reproduce in Plasticene the beautiful creatures in my head.

And that alas was what I think did for Margaret MacPherson - simply where her book was in the collection - the last story in the book. If she'd have been before The Midnight Horse, I'd have read her on the way to it, as I read They Bought Her a Pony, despite the fact I was never that keen on it.