- August 28, 2014
I think if there were an award for most typically British pony book title, Not Such a Bad Summer would win it. It really could mean anything, from 'it only rained for four weeks out of the six,' to ' we managed to spend all of it at our estate in Scotland with our own herd of Highlands, but don't want to appear boastful.' 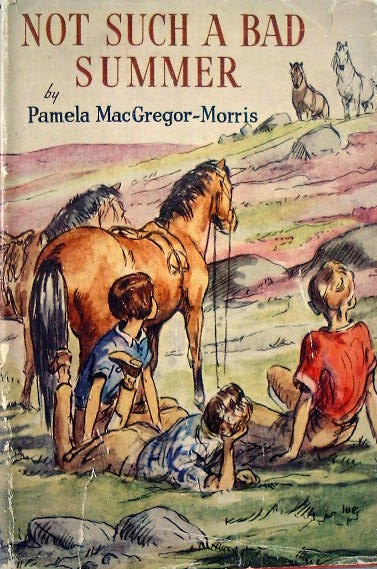 In this case, if you'd asked the protagonists of the book what their summer had been like, and they'd replied "Not such a bad summer," what they'd actually have meant was that they'd hurled themselves about Dartmoor looking for an escaped prisoner, who repented (perhaps not totally convincingly), and then had to be rescued from worse criminals.

Christina Wilsdon said…
That's what we'd planned to do this summer, but it didn't work out that way. So we spent it on our estate with the rare cattle and ponies instead.
28 August 2014 at 15:14

Jane Badger said…
Oh - me too! I did hope that perhaps we might uncover a vicious gang of thieves with links to the London underworld who were determined to spoil our riding, but no.
28 August 2014 at 15:38