- August 25, 2014
Today's pony book is the second in Diana Pullein-Thompson's Sandy and Fergus series. In the first book, Ponies in Peril, Sandy and Fergus move to the country, make friends, and manage to buy a pony. Their neighbours run a trekking centre, and in the second of the series, Ponies on the Trail (1979), they're asked to help out on a week long trek. 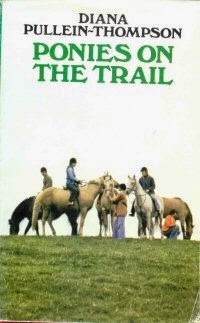 As ever with pony treks, the trekkers are a very mixed bunch, and this leads to all sorts of problems.

My own experience of pony trekking was limited to a few long rides I managed if we managed to land up on holiday somewhere close to a riding school. My main requirement of a holiday was in fact it being close enough for me to ride during the week we were off. I don't remember doing it that often, so I'm guessing that other requirements came rather further up the scale when my parents were choosing holiday destinations.

I do remember one trekking centre we went to in Wales for a morning's ride. My sister and I turned up, only to find that this was the sort of place where most people were there for the week. To do this was my ultimate dream holiday. Every year, PONY Magazine would fill up with adverts for trekking centres, and I would drool, longing to be sent to one.

The people at the Welsh centre had achieved the dream: we hadn't, and they knew it. They knew where everything was. We didn't. They knew what all the ponies were called. We didn't. We had to be told what horses we were going to ride. They didn't, because they'd been allotted a pony for the week. I wish I could tell you that once my sister and I were on our ponies, we outrode the weekly incumbents, leaving them gasping at our prowess, but I can't. I can't actually remember anything about the trek at all. What I do remember is being made to feel outsiders, and it mattering. Once we were actually out on the trek, it was fine. There's a limit to how much conversation you can hold when you're in a line of horses.