- August 04, 2014
The PBOTD for 3rd August is Primrose Cumming's Silver Eagle Carries On. Written during the Second World War, and published in 1940, it's the follow up to The Silver Eagle Riding School, and is appropriate as we're coming up to the anniversary of the start of World War I. 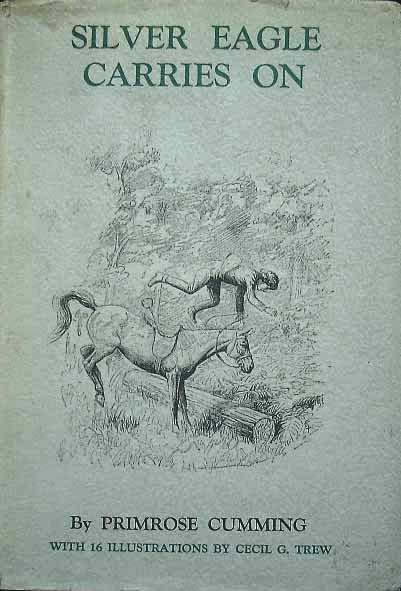 Silver Eagle Carries On sees the Chantrys struggling to keep their riding school going in war conditions. They fight even to keep their horses (horses were still requisitioned at the beginning of the war) and tackle petrol restrictions by teaching ponies to pull carts. It's a tough battle, keeping a business going in the teeth of restrictions on animal feed and petrol rationing, and one of the sisters going off to do war work, but the Chantrys manage.

Not many pony books were published during the war: authors were doing war work themselves, and there were paper restrictions as war went on, but Silver Eagle Carries On is particularly interesting for having been written during the war. It throws an interesting light on what it was like to be a riding school trying to survive, and is worth reading with the Pullein-Thompson sisters' autobiography Fair Girls and Grey Horses, which describes the sheer hard physical graft of keeping ponies and a riding school going during the war.