- December 04, 2014
There are some books in life that you remember where you were when you first found them. In my primary school, there was a bookshelf behind the door of my second year (year 4) classroom. If you finished your work early, you were supposed to go and find yourself a book from the shelves and read until everyone else had finished. This was absolutely no hardship to me, but the only book I remember getting down from the shelf is Elizabeth Goudge's The Little White Horse. I picked it up because it had the word "horse" in the title, and as pony books were a rare beast on the bookshelves, I leapt on it. 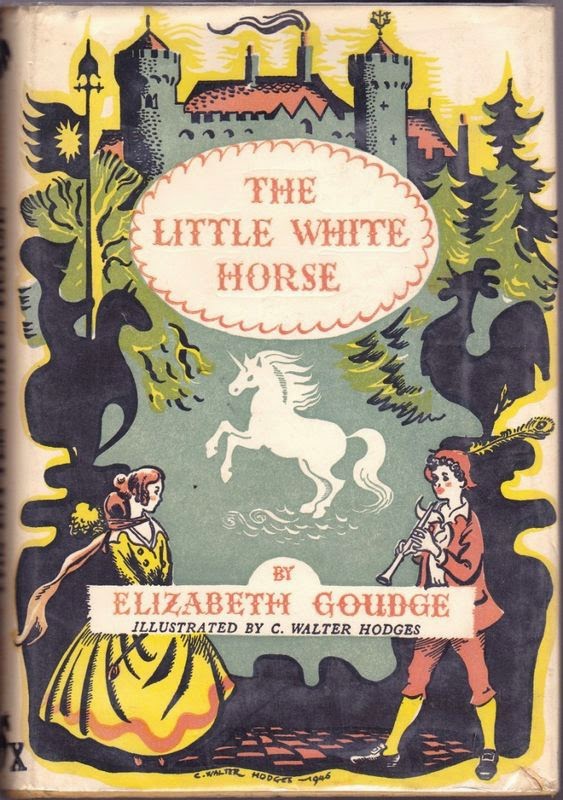 The Little White Horse, of course, is not a pony book. It's the story of orphan Maria, her governess and Maria's uncle, Sir Benjamin, with whom she goes to live, and the wicked Monsieur Cocq de Noir. It's about the struggle of good and evil, and about learning to understand each other and forgiving. It's also the most extraordinarily sensuous book. I am not one who luxuriates in the physical landscape of a book, but The Little White Horse has provided so many extraordinarily vivid mental pictures which affect me even now.

As a child brought up in the 1960s and 1970s when central heating wasn't exactly universal, how could I resist the description of Maria's bedroom:

"The ceiling was vaulted, and delicate ribbings of stone curved over Maria's head like the branches of a tree, meeting at the highest point of the ceiling in a carved representation of a sickle moon surrounded by stars.
There was no carpet upon the silvery-oak floor, but a little white sheepskin lay beside the bed, so that Maria's bare toes should meet something warm and soft when they went floorwards of a morning.... The fireplace was the tiniest she had ever seen, deeply recessed in the wall. It was big enough for the fire of pine-cones and apple wood that burned in it, filling the room with fragrance. ... Over the fireplace was a shelf, and on it stood a blue wooden box filled with dainty biscuits with sugar flowers on them.... And beside the fireplace stood a big basket filled with more logs and pine-cones, enough to keep her fire burning all through the night."


What I had were curtains that blew horizontal in the wind, the nightly gallop of creatures in the roof space above, and at least six blankets on the bed in the winter to try and preserve some warmth.

I loved the crowds of salmon pink geraniums Loveday Minette surrounds herself with (even as I write that, I can smell geraniums) and I still think of that scene every time I do anything with my own geraniums. When I failed to avoid being volunteered to do the church flowers, I remembered the flowers the children had put round the feet of the Lady in the Little White Horse, so that was what I did too.

There were, of course, horses, though the most evocative scene involving them doesn't happen until the end. So here, because Christmas is coming, and we all need proper wild sea horses, and a unicorn, for Christmas, is this:

"...Maria, though she had to shut her eyes because of the brightness of the light, laughed aloud in delight. For she knew the galloping horses would not hurt them; they would just wash over them like light, or like the rainbow when one stands in the fields in the sun and the rain.
And it happened like that. There was a moment of indescribable freshness and exhilaration, like a wave breaking over ones's head, and then the sea-sound died away in the distance and, opening their eyes, they saw again only the faint grey ghostly light that showed them no more than just the faint shapes of the trees and the outline of each other's faces. The white horses had all gone... all except one.
They saw him at the same moment, standing beneath the giant pine tree to their right, with neck proudly arched, one delicate silver hoof raised, half turned away as though arrested in mid-flight. And then he, too, was gone, and there was nothing in the woods except the normal growing light of dawn."

Goldielover said…
I find Elizabeth Goudge's descriptive writing both lyrical and unforgettable. The first book of hers that I read was Smoky House, when I was about eight. Not a pony book, but does have a wonderfully stroppy donkey in it. I never forgot the description of Spot the dog climbing up from the smuggler's cave through an underground passageway, although I did forget both the title and author's name. About ten years later I ran across an adult book (Gentian Hill) which reminded me strongly of that half forgotten childhood read. It took some time (this was pre internet days, after all) before I realized that they were by the same author. Needless to say, I now own it.

Surprisingly, I didn't run across The Little White Horse until I was an adult. I love it. A good winter comfort read.
6 December 2014 at 01:18

Kate said…
I've never read this, but I am just listening to an interview with JK Rowling and she said it was one of her favourites as a child :)
8 December 2014 at 23:34