- December 13, 2014
Isn't this what everyone wants for Christmas? I headed many a Christmas list with PONY, but I never actually got one. One year, we spent Christmas with some of my in laws, and when we arrived, my niece asked "Did you come up through the garden?" "Yes," we said.

"Did you see a pony there?" she asked. "Because I did ask for one and I did think it might be in the garden."

Sadly for my niece there was no pony in the garden that year, although a couple of years later there was one at a local stables, just for her. 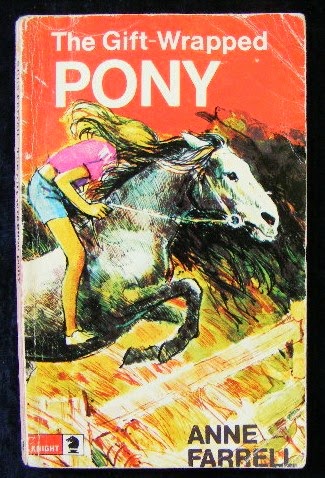 The children in Anne Farrell's The Gift-Wrapped Pony are slightly more fortunate because they do have a pony. Their problem is to hang on to the pony, because wicked Arum loves to escape, and the children's father says he'll sell Arum if the children can't stop her getting loose.

The story was loosely based on the author's childhood experiences, and the illustration on the front is of the author's sister (Sally Odgers, an author in her own right).