- December 15, 2014
I'm picking up the theme of the most-wanted Christmas present here: the Dream Pony. For most children with a pony addiction, they'll be lucky if they manage riding school, let alone a pony of their own. The pony who lives in your dreams is the one you'll have most experience of: the pony whom only you can ride, who is touchingly pleased to see you, and who is always obliging, and never does any of the inconvenient and painful stuff that real life ponies do. 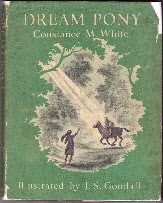 That said, Constance M White's Dream Pony (1951) is a more realistic example of the genre than most. For one thing, it has a sympathetic portrait of its gypsy characters, gypsies in most pony books being stigmatised as horse stealers at best. It's the story of a girl who did dream of ponies, and whose dreams were made real.

Constance M White was criticised by the Times Literary Supplement for not knowing enough about her subject, ballet, in her first school story, A Sprite at School, and so when she decided to write a pony book, she made sure she did her research. She stayed on a farm, watched the horses and talked to the groom. She said that as her speciality was school stories, she combined the ponies with school, which she did with Ponies at Westways (1949) and Nutmeg at Westways (1956). Dream Pony is her one straight down the line pony story.