- December 01, 2014
Last year I did a Pony Book Advent Calendar, which was what sparked this whole PBOTD thing off. I have tried not to just re-run what I did last year, but there are only so many Christmas and winter books that you can feature before dibbling off into books which are so obscure even I forget I know about them. So, today's PBOTD is one which cropped up last year (I am not going to flag up all the ones I've repeated, promise). Ursula Bruns' Snow Ponies is one of those stories that's iconic in the country where it was written, but not as well known everywhere else. It is a very pretty book, and I admit that after I featured it last year, I went out and bought one. 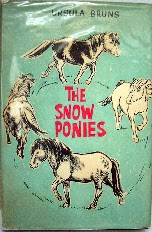 Konstanze Allsopp, translator and pony book fan, very kindly wrote a piece for me on Ursula Bruns, saviour of the Iceland Pony, so here is an abridged version.

Although almost unknown here Ursula Bruns is one of the best-known authors in Germany of textbooks on keeping ponies at grass, and related subjects. She is also credited with saving an entire pony breed single-handedly from extinction - the Iceland Pony.

Born in 1922, she wrote her first fiction novel around 1950, Hindernisse fuer Huberta (Show Jumps for Huberta) and I don't think it was ever translated, because Ursula Bruns distanced herself from any competitive riding, show jumping and the official stance on FN-regulated competitive riding, and Hindernisse fuer Huberta deals with exactly that topic. It's a charming book about a girl who is given an Arab pony that her father promised her, if she wins a prize at prize giving day at school, and her trials and tribulations to get her pony to jump (extremely high for an Arab) and win the main show jumping competition at a show.

Around that time Ursula Bruns had become aware that the Iceland pony was fast becoming extinct. Modern sledge mobiles and other equipment were taking over the work of the Iceland pony which is well-known for having 5 gaits instead of a normal horse's three. (In Iceland pony circles, canter/gallop are considered as one pace). One gait specifically, the “running walk” (or tölt) helped Iceland ponies cross over marshes and ice flows without sinking into the ground as any other horse would. Modern machinery was able to do the same so the ponies were being sold off for dog meat.

Ursula Bruns travelled to Iceland and exported a herd of these ponies to Germany. She then wrote her second fiction novel Dick und Dalli und die Ponies, translated as The Snow Ponies (referring to the Iceland ponies, of course). It is a lovely story about two girls who live with their grandmother who breeds Shetland and Iceland ponies. Its popularity is so high it is still in print. In fact, a follow-up book of the girls of Immenhof (the name of the stud farm), Dick und Dalli und die Ponys: Ferien auf Immenhof (Holidays on the Immenhof) came out under her name in July 2008. Whether she really wrote it or a ghost writer was appointed so that the publisher could cash in on the success of the first book I don’t know. In this story a cousin comes to stay. He is not a gallant hero as the girls imagined but a wimp and the girls have to toughen him up.

In addition at the time of the publication of the first book, it not only spawned a series of 6 “Immenhof” Films but also made many more people aware of the plight of the Iceland pony and encouraged Germans to export these versatile, good-tempered ponies. It also helped change the attitude of the Icelandic people towards its most valuable export asset.

Today it still is the most popular pony breed in Germany, able to carry adults without the slightest problem although the ponies are rarely over 13.2 h.h. Ursula Bruns wrote numerous textbooks (around 40) concerned with their maintenance, care and how to ride them, especially how to ride the two extra gaits, the pass (skeið), and the running walk.