- December 24, 2014
If you'd been wondering when I'd get round to featuring Jill's Gymkhana, here it is at last, and here is Jill, at her first Christmas in Chatton. Earlier in Jill's Gymkhana, from which the illustration and extract come, Jill walks some children to school, for which she's paid. Mrs Crewe doesn't approve of Jill being paid for this at all - she's allowed to accept an apple or some sweets, but that's it. Jill's devastated, as she'd planned on using the money to feed Black Boy during the winter.

Now I'm older, I must admit I do wonder what those parents who paid Jill must have thought when their payments were returned. I like to think that they sympathised with her efforts to keep her pony, and I'm glad they gave Jill something splendid for Christmas which her mother couldn't reject.

"The magnificent thing was soon revealed, a lovely dark-blue pony rug bound round with scarlet. I was speechless. It was Mummy who picked up the card and read aloud, "To Jill Crewe, with many thanks, from the mothers of Jennifer, Angela, Jane and Elizabeth..... Of course the first thing I did was to rush off to try the rug on Black Boy. He looked wonderful with it on, and exactly like a blood pony, and he arched his neck and bucked a bit, just showing off because he knew how nice he looked; so I walked him up and down in front of the cottage windows and Mummy and Martin waved approval.

After getting all these wonderful presents, especially the horsy ones that I hadn't expected, I think you will agree with me that it was a very nice Christmas." 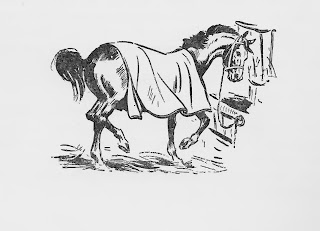 You can read more about Ruby Ferguson here.
PBOTD Year of Pony Books

Anonymous said…
I love descriptions of Christmas in otherwise un Christmassy books, and I always particularly liked this one, finding the description of Jill and Mummy's Christmas quite touching. There is a real sense of Jill's gratitude for what she has that is in keeping with the season. Thankyou! Caroline
28 December 2014 at 13:26

Jane Badger said…
I think you have it exactly right - and it does make me think what a very far cry Jill's Christmas is from our Christmases now!
29 December 2014 at 10:31

Anonymous said…
Yes indeed, I was thinking that,too!
On a separate note, another description of Christmas in a pony book that I always liked - and it is quite different from Jill's - is in 'Wild Pony' by Lucy Rees, a book that I loved fanatically as a teen.
I have been reading your blog for about a year, and I very much enjoy it.
Caroline
30 December 2014 at 08:39

I have read The Wild Pony but don't remember the Christmas bit at all, which is a splendid excuse for getting it down and reading it again (and in fact her other pony book).
30 December 2014 at 11:23