- December 16, 2014
Today's book is the start of a brief series to celebrate the fact it's Olympia at the moment. I don't think that the major horse show Jill and the Cortmans go to in this book is actually specified: it's obviously a very large one but that's all we know. So, I have stretched a point somewhat to get Rosettes for Jill in, but here it is.

If I was forced to the wall and told to list my favourite Jills, this would probably be one of them. I love the way Jill is, as ever, not keen on the prospect of new people coming to stay who might ruin her plans. This book's visitors are Melly and Lindo Cortman, and their dogs. The Cortmans are dog-mad, and at first take rather a lofty view of Jill and her ponies. 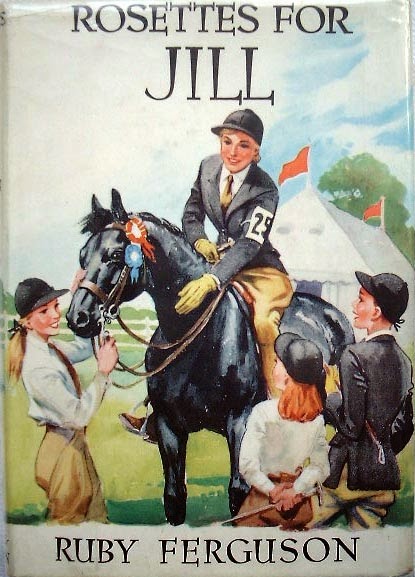 But then they are bitten by the pony bug. Being the fortunate possessors of wealthy parents, they're bought the wonder-pony Blue Shadow. Blue Shadow is beautiful. She is kind natured. She can show. She can jump. There is nothing she cannot do. There are times Jill is tempted to be jealous, when Melly and Lindo's riding improves, and it looks as if they're set for glory, but there is a sting in the tale. In fact, several. 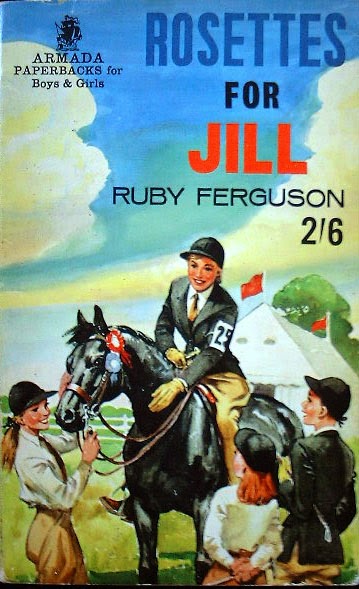 Melly and Lindo manage to lame Jill's Black Boy before the big show. Jill is (justifiably) furious about the fact they've lamed him, and eventually the Cortmans suggest Jill ride Blue Shadow instead of them at Chatton Show. 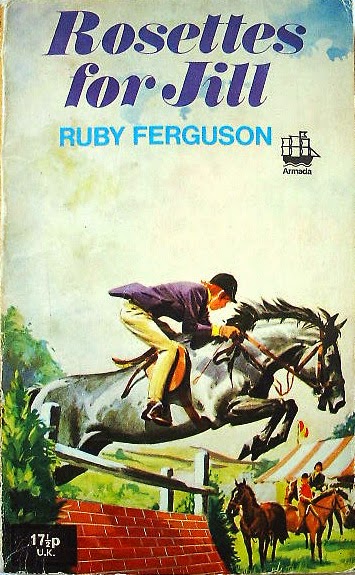 Jill, as she admits, behaves pretty badly to the Cortmans, and needs hauling up by Mummy before she starts to behave in a half way decent fashion. I do love the way we see Jill behaving at her worst in this book, determined not to forgive, and to nurse her grudges. In the end, she does relent and start behaving decently. I particularly like the way Ruby Ferguson lets us see the whole thing through the points of view of the Cortmans, Mummy, and Jill. 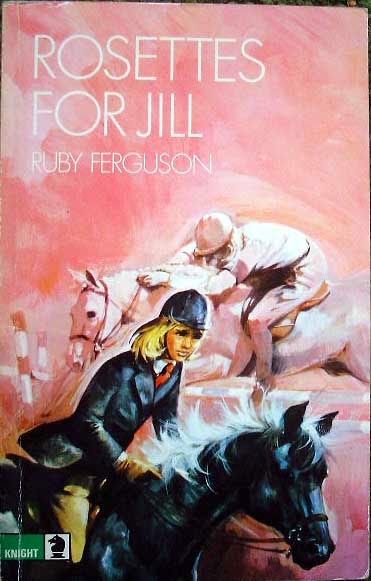 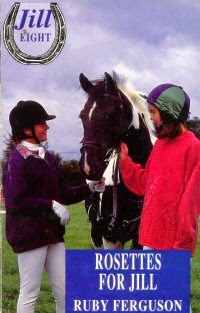 The book ends in a rather dramatic fashion when Blue Smoke, who until then has been living in a beautiful golden dream of her own, suddenly realises that yes she is a show ring, no she doesn't like them at all, and bolts. It's just as well it was Jill riding and not one of the Cortmans.

In passing, as I read the book now, I do wonder how the wonderful Mr Prescott, who is presented as the sensible approach to acquiring ponies, rather than doing it by yourself which is Jill's first plan, didn't know the common gossip about Blue Smoke - "the pony who used to belong to the Graham girl, and was sold. She's a brilliant jumper, but too temperamental for words. Takes a dislike to another pony and simply dashes out of the ring." Mr Prescott tells Jill he "bought him yesterday from a woman I know whose daughter has out-grown him."

Before I typed that, I hadn't noticed Blue Smoke's change of sex either. It seems odd that Mr Prescott wouldn't have known about Blue Smoke's peccadilloes if he'd known the family, but maybe that's just a Ruby-ism. Or was Ruby saying that no matter who you were, horses were horses and something could always go horribly wrong? 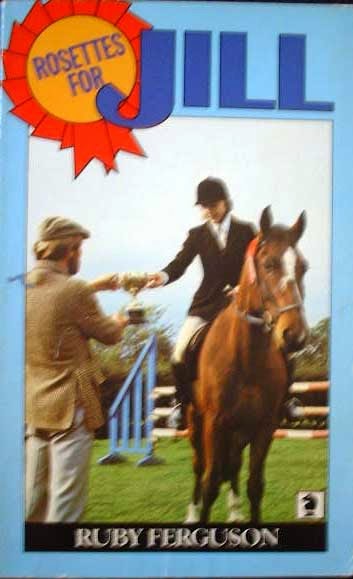 There's still plenty to enjoy in Rosettes for Jill. Possibly my favourite bit in the book is where Mr Prescott takes the Cortmans and Jill to a large show (I don't think the venue is specified). By the time of the prize giving for the final class, Jill is in a world of her own.


"I simply was not there at all. I was in a sort of beautiful golden dream. I was giving a dressage exhibition in a huge magnificent arena, under the arc lamps, on a horse that did intricate steps like a ballerina. It was so still you could have heard a pin drop, except for occasional Ooohs and Aaahs of admiration which the crowd could not repress.....and then I was all alone in the arena and the Queen in a most glamorous blue dress was handing me a Cup and the photographers were snapping madly.

"do you want to spend the night here by yourself?" said Melly's voice. "Or have you sat on some gum?"

I've sat in too many beautiful golden dreams myself not to utterly empathise with Jill. And with the rude awakening from the golden dream.

Mary Trafford said…
I'm reading a "Jill" book now, as a walk down memory lane. It's "Jill's Riding Club," an old paperback edition that is literally falling apart. I have a few other Jills in hard cover. I love the young horsewoman's feisty spirit and frankly expressed opinions. Thanks for this post on these wonderful books!
21 December 2014 at 23:55