- December 03, 2014
I admit it: I've never read one of the Linda Craig mysteries, although I've had a lot of them on the shelves in my time. Today's PBOTD, The Secret of the Old Sleigh, was written by one of those authors who don't exist: Ann Sheldon. The various Linda Craig series were written by several ghost writers, only one of whom (Alison Hart) I've been able to identify with any certainty. 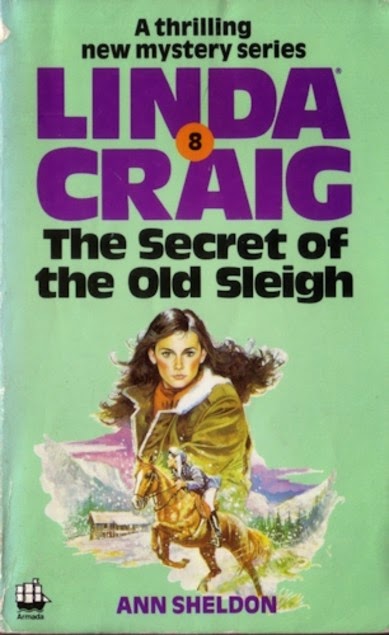 The original series of six titles appeared in America in the early 1960s, and were added to in the 1980s. Armada Books picked up the series in the UK, reissuing them with new covers. The books feature heroine Linda Craig, her brother Bob, and Linda's palomino filly Chica. Each book is a mystery story with a Western riding background.

A note if you buy any of the third series of books: in the first series, Linda and Bob are 16 and 18, but in the third series years are ruthlessly chopped away from them and they are around the age of 10 (and Chica is renamed as Amber). Maybe this change in the characters’ ages reflected what Scholastic felt what the age of the pony book market had become.