- December 25, 2015
Patricia Leitch died earlier this year. She wrote one of the best ever pony series with the Jinny books, and book eleven, Horse of Fire, has one of the most magical Christmas scenes in a children's book. This post is dedicated to Patricia with thanks for the many presents she gave the world through her books.

Jinny and Shantih are appearing in the local nativity play. Jinny has fine and splendid dreams about how she and Shantih will appear as glorious king and even more glorious horse, but when the moment comes, it's not like that at all. Jinny is cast into utter misery by the rude disconnect between her dreams and reality, but then, as they're leaving, a little boy stops and stares up at Shantih.

"The little boy stared up at Shantih, his eyes wide with tiredness and excitement. 'I saw them,' he stated stubbornly. 'It was the golden wings it had.' 'You're right,' said Ken, speaking directly to the little boy. 'I saw them too.' 'Filling his head with such nonsense,' snapped the woman, but the child's face lit up as he smiled at Ken. 'You see,' said Ken, as they watched the little boy being dragged away. 'It is always worthwhile. All his life he'll remember Shantih's golden wings. Tell his grandchildren about them.' A surge of gratitude lifted through Jinny. It had all been worthwhile - the hassle, the striving, the not giving in. For the little boy the nativity play had been as wonderful as Jinny had wanted it to be for everyone." 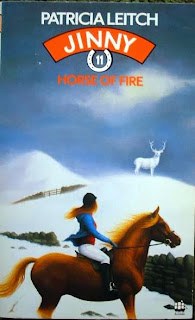 And then Jinny and Ken, after they confound the deer smugglers who've been plaguing the moors, go to the Tinkers' celebration of Christmas.

"Here there were no costumes, no kings, no one striving to make this simple ceremony the best ever. It was as it was. Suddenly Jinny saw that all her efforts to turn the Glenbost nativity play into a spectacular happening had only been a way of showing off, wanting to make people see her as the best king, to admire Shantih. She hadn't really cared about the nativity. She had only cared about Jinny Manders being the most.

They went one by one and knelt before the Child. Sara first, the other tinkers, then Ken, and last of all Jinny. It seemed they moved in a formal, precise dance in which all played their part - those who waited and those who knelt. Jinny would have left Shantih as Ken had left Bramble but Sara motioned her to take Shantih with her. While Jinny knelt Shantih breathed warm sweet breath over the baby, who opened his eyes and laughed."

Thank you very much for sticking with this Advent Calendar. A very Merry Christmas to you all.

Val said…
A lovely Advent calendar ! Many thanks